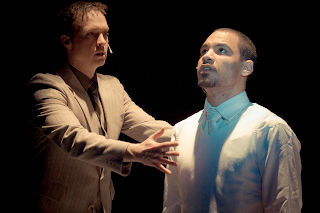 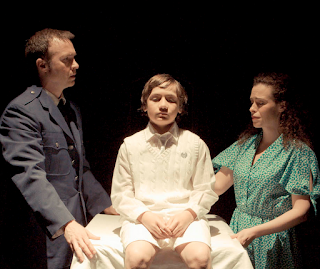 “The Who’s Tommy” at Centerstage in Federal Way is astounding. As I walked to the lobby at intermission, I said one word to Centerstage Artistic Director Alan Bryce: “Wow!” I seldom if ever express my opinion of plays I am reviewing before the review comes out, but in this instance, I was so moved by the music and the spectacle of “Tommy” that my “Wow!” was an involuntary reaction to what I had just witnessed.

From the opening scene, which is a musical overture that sets the scene and tells the backstory in highly stylized mime and dance, the show’s energy is nonstop. The music is throbbing, building crescendo to crescendo; the emotional intensity is unrelenting. The music is an endless medley of songs that tell the story of a deaf, mute and blind boy named Tommy from his conception at the beginning of World War II to his miraculous recovery in the late 1960s.

The movement of the large cast through many scene and costume changes must be marvelously complex, but it seems simple because of David Duvall’s direction and Terence Kelley’s choreography. Christina Barrigan’s set and lighting are effective yet simple. The set consists of two risers and a floating projection screen. There are no set changes, but a few props are brought in as needed: a couple of tables, a chair, the frame of a pinball machine, a mirror, and a third riser that bridges the other two. The lighting is unobtrusive. The video projections, also by Barrigan, help carry forth story elements that would otherwise require exposition. It is all very nicely done.

Rachel Wilkie’s costumes are a marvelous parade of fashions from the ’40s, ’50s and ’60s. Having grown up in those decades, I can attest to their authenticity, from the everyday wear of young people and their parents, to the ostentatious costumes of hustlers and whores, to grown-up Tommy’s glittering white rock-star suit.

The cast is almost impeccable, from Kamalani Taylor Fernandez as 4-year-old Tommy and Ethan Alanzo as 10-year-old Tommy, to Jesse Smith as the Narrator/Tommy, to standout ensemble members such as Matt Dela Cruz and Niclas R. Olson as “Local Lads.” They sing strongly, dance with energy, and believably portray a range of characters. CJ Conrad’s dancing is athletic and dazzling. Kayli Johns, Zandi Carlson and Hilary Heinz are stand-out dancers. Heinz, an experienced actor and dancer, combines great physical movement with intense facial expression. She stands out in ensemble numbers and is a joy to watch.

Smith’s stage presence is astonishing. He manages without overt histrionics to assume many different personalities, from the shy and damaged young Tommy, to the almost messianic narrator, to the exuberant and loving miracle Tommy of “I’m Free” and “Welcome.” His voice, soft and mellow, harmonizes hauntingly with the higher voices of the two child actors – Fernandez and Alanzo – on the mesmerizing repeated refrain “See me, feel me, touch me, heal me.”

Sam Barker is both comically lovable and sleazy as Uncle Ernie, and Erik Eagleson comes across as menacing and arrogant yet somehow likeable as nasty Cousin Kevin.

The incomparable Stacie Calkins proves to South Sound audiences once again that she can belt out blues and gospel songs like nobody else. Every show needs at least one show stopper, and in this one, it is Calkins singing “The Acid Queen.”

Special kudos must be given to the hard-rocking band led by Duvall and driven by Troy Lund’s throbbing drum beat.

The only complaints I have are with the musical itself: All of the big guns go off in the first act – from “The Acid Queen” to the rock anthem “Pinball Wizard.” Act II needs a finale that can top those numbers, and while the reprise of “See Me, Feel Me,” “Listening to You,” with all three Tommys backed by the company, comes close, it doesn’t quite make it.

There also were some unfortunate sound problems in the performance I saw, which likely have been corrected by now.

For people who love musicals, especially those who love rock and roll, I cannot recommend this show enough.