Going all the way


The Full Monty at Capital Playhouse 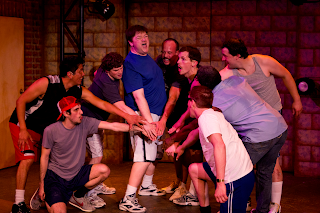 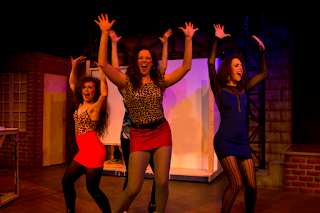 The Full Monty at Capital Playhouse is a lot of fun. The almost sold-out audience Friday night came to be titillated and tickled and they got their wish — some more so than others as there was a hilarious wardrobe malfunction in the final scene that not everyone caught. I heard stories from cast members of similar malfunctions during rehearsals; so from rehearsal through opening weekend the whole thing must have been a blast for everyone involved, and all because six men took their clothes off for a one- or two-second glimpse of skin.
Really, that’s what the whole thing was all about. Six rather average looking working men played Chippendales for one night only, outdoing the famous male strippers by going all the way, or as they say in Britain, going the full Monty. There was an almost three-hour buildup to the climactic moment — which was actually almost anticlimactic. But the buildup to that moment was what it was all about — the fear and helplessness of proud men who have lost their jobs and their courage in pulling off this one big event, all told in a humorous vein through the medium of song and dance.
Along the way they have to struggle with self-doubt, with wives that may or may not stand by them, with custody disputes, depression, suicide, obesity and coming out as homosexual in a macho man’s world that’s been turned upside down now that the women have become the breadwinners.
First time director Jerod Nace, who played Malcolm in The Full Monty at Tacoma Musical Playhouse five years ago, summed it up nicely in a program note. He wrote:
“For most of its history the American musical aspired to nothing more than a mild and amusing evening’s worth of entertainment with laughs, pretty girls and snappy songs. All of life’s problems could be solved with a bit of clever plotting and a catchy tune. Contemporary musicals aim to be more profound, offer social commentary and make a serious statement. The Full Monty is a happy marriage of both.”
This show leans a bit more toward the snappy songs than toward the profound social commentary, but it at least acknowledges the seriousness of many of the big issues of the day, which are even more relevant today than when the film version was released in 1997.
It’s an evening of rousing funky music that starts out with two scenes played out simultaneously: angry men on the right arguing about their pitiful plight and ecstatic women on the left going wild over the male stripper Buddy “Keno” Walsh (Jeff Barehand, who wowed audiences as Woof in Hair) in a very funny and sexy dance.
Musical highlights include a beautifully touching duet with Gregory Conn as the boss, Harold Nichols, and Gwen Haw as his wife, Vicki, and an equally touching duet performed at a funeral by Bruce Haasl as Malcolm and Leland Brungardt as Ethan, two men who quietly discover their love for each other. The overall comedic tone is restored at the end of this touching scene when Chris Serface as Dave Bukatinsky comes over to his friend Jerry (Patrick Wigren) and says in a hilariously funny tone of voice, “They’re holding hands.”
Another movingly tender scene is presented earlier with great sincerity when Malcolm attempts suicide and Jerry and Dave come to his rescue. The comic skills of all three are abundantly in evidence here, and the old VW bug is a great touch.
Probably the biggest show-stopper of the whole production is when Noah “Horse” T. Simmons (Geoffery Simmons) shows up at the audition. He’s an old black man who looks like he can barely walk, much less dance, but when he cuts loose on the rocking “Big Black Man” everyone goes berserk. Great makeup and costuming by Ricky German convincingly transform the handsome Simmons into an old man and his great dancing skills and expressive acting do the rest.
Other actors of note in this production are Christie Murphy as Dave’s wife, Georgie; Bailey Boyd as the flirtatious Estelle; and Clark Hallum as Jerry’s son, Nathan.
Wigren is outstanding as Jerry. Regulars at Capital Playhouse have come to expect nothing but the best from Wigren. He first wowed me as Rooster in Annie and again as Leaf Coneybear in The 25th Annual Putnam County Spelling Bee. He plays the complicated Jerry with conviction and humor. His love for his son is palpable. He’s strong on rocking tunes like “Big-Ass Rock” and “Michael Jordan’s Ball,” and he solos with distinction on “Breeze Off the River.”
There were a few microphone problems the night I attended and a very few moments when the band drowned out the singers. There were also way too many set changes that could not be handled without disruption in such a small space. Some of the blocking was difficult, again attributable to the tight space and large cast, but all of these problems are minor and easily overlooked. There was also, as I mentioned, a wardrobe malfunction, but this only added to the delight of the play. Keep malfunctioning, guys.