The Harriett Tubman inspired show extends at B2 Gallery 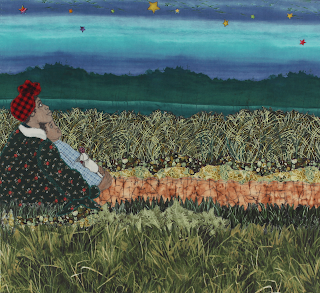 B2 Gallery has extended the exhibition "Sweet Freedom's Jubilee" through June 9. The show features fiber artist Mary Johnson and sculptor Mar'zil Davis with works celebrating the 99th Anniversary of the death of Harriett Tubman.

Johnson's woven tapestries are breathtaking. Her depictions of the lives of slaves, it almost goes without saying, touch the heart. Visiting this show is almost like - albeit on a much smaller scale - like visiting the Holocaust Museum in Washington D.C. or like, I can only imagine since I've never been there, like visiting the Cape Coast Castle Museum in Africa where slaves were once held before being brought to America. The plight of slaves and the heroism of the Underground Railroad cannot but touch the hearts of any who visit this exhibition.

Johnson's tapestries have an intimate and homely feel. There is warmth of emotion even though the surface quality of her pieces has the crispness of a snowy winter morning.

Many of her scenes are in a long horizontal format, which creates the feeling of a story unfolding over time as in a scroll or stills from a movie.

In none of her works is the crispness I alluded to more pronounced than in "Following Harriett," a scene of Harriett Tubman leading a family to freedom. They are trudging through fields of scrub pines in the snow. The background is stark black and white, and only the figures of Harriett and the family are in color. Harriett carries a rifle, and she reaches back to halt the family - three adults and two babies - in a gesture indicating danger approaching. The tenseness of the moment is strong.

"North Star" is a picture of hope. An escaped slave wearing a bright red bandana on her head holds a child who is holding a rag doll. They stand in a field of tall grasses and reeds, beautifully pictured with rhythmical patterns in tones of blue and green, and look across a still river at the promised land of freedom on the far shore.

"Hallelujah Shores" shows the next step in the journey, but with a different family. Three men and two women have just crossed the river to the north and are stepping out of their little boat onto the marshy ground. The women still huddle together and the men step forward fearfully as if none of them can believe they are actually free. And as history tells us, many of them were not free or their freedom was short-lived as many were caught and sent back into slavery even after arriving in non-slave states.

The faceted way much of the background scenery is patched into this scene adds attraction.
Davis's sculptures are interesting as historic notes as they show the way many of the slaves lived, the tools they used and the way they dressed. But they are nowhere near as artistically satisfying as Johnson's tapestries. They look like typical porcelain figurines from an earlier era and - I hate to say it but it's true - they look so stereotypical and cartoonish that they would be seen as racist if done by a white artist.