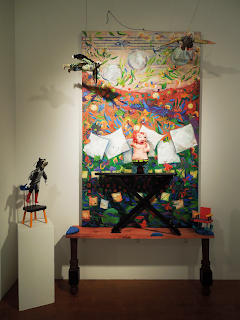 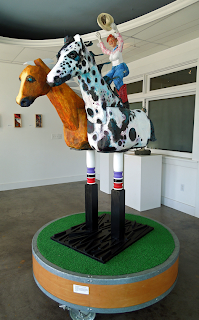 
"Reconfigured - a Collaboration" is an awesome little show featuring the artwork of Becky Frehse and Jane Kelsey-Mapel. Frehse, a longtime Tacoma artist, is well known in the South Sound. Mapel, from Phoenix, Ariz., is not familiar to area gallery-goers. The two worked together on this show — winters in Phoenix and summers out here. And it would take someone very familiar with their work to tell which parts Frehse did and which parts Mapel did.

But here’s a hint: Frehse is primarily a painter. Although she has done some three-dimensional work, she approaches her art from the standpoint of a painter, composing as for a flat format and painting with energy. She tends to be not exactly exacting but more slap-dash and expressive. Mapel makes ceramic sculptures. She is more exacting and detail oriented.
The works in this show — at the risk of oversimplifying my description — are painted ceramic dolls with bodies and clothing and props made from, among other things, Styrofoam that is coated with gels or plaster or paper mache and painted. There are a lot of horses in this show and a lot of Chinese figures. The dolls are, for the most part, funny. Some grotesquely so.
I mention their different methods of working because they complement each other — Mapel’s meticulously detailed ceramic work setting off Frehse’s more expressive painting style. Mapel made the dolls’ heads. Frehse made most of the bodies and some of the backdrops, but they worked together on these. You can’t separate out who did what.
A few of these dolls are aesthetically exciting. Particularly the figures in “Conversation No. 1” and “Bather By A River” and the doll in front of “Seeking Center.” The others would probably be interesting but not terribly exciting if presented as stand-alone figures, but they come alive when combined with all the other elements.
The stand-out pieces are a large painted construction called “Seeking Center,” the circus rider that dominates the center of the gallery, and a series of six wall-hanging boxes with dolls and constructed and found objects called “Conversation” (numbers one through six).
“Seeking Center” is a painting in the vein of Robert Raushenberg’s early combines but more decorative with dense and elaborate patterns of flowers and paper lanterns and white doilies with brilliant orange and green colors, birds suspended above and a grotesque pink doll on a black ironing board in front. This is a magnificent work. Nothing new, mind you, nothing that Raushenberg didn’t do half a century ago, but it is gritty and colorful and intense, and I love it.
The “Conversation” pieces are like Joseph Cornell boxes only more expressive. Two of them have wonderfully expressive little clay dolls that look like a blend of Matisse and de Kooning sculptural figures.
The circus rider is pure kitsch. A big-butted cowgirl in jeans and boots stands astride two galloping horses. The texture of the girl’s clothing and the fluid painting on the horses is great, and the whole thing is exuberant and funny and almost overwhelming in its large scale relative to the small space of the gallery.
[Gallery 301, “Reconfigured - a Collaboration,” Saturdays 1-4 p.m., Third Thursday 5-8 p.m., and by appointment through April 30, 301 Puyallup Ave., Tacoma, 253-380-1293.]
Posted by Alec Clayton at 6:54 AM