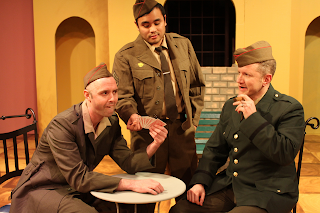 Leah Sitzes as Hero, Ken Luce as Claudio
Photos courtesy Olympia Little Theatre
You’ve heard it before; Shakespeare can be a challenge to the audience because the language he wrote is not even close to how we speak today. Still, the Olympia Little Theatre, a black box tucked away in the NE corner of our state capitol, took on the challenge, and the results were laudable.
If you are worried about getting lost in archaic prose, relax; they’ve got you covered. When Shakespeare is done well, the actors understand the Bard’s words so well that even without translating them into modern English they can, by their actions, expressions and delivery, convey exactly what he was saying to you, the audience. This cast did that superbly, from top to bottom.
To make the comedy more comedic, more familiar, and just plain more interesting, director Terence Artz chose to set the play in 1945 (remember, the story begins with the protagonists arriving home from war) and in, of all places, New Orleans. That gave him a passel of interesting choices for the characters. For instance, the host, Leonato (Marvin Young), becomes an elegant southern gentleman, while his brother Antonio morphs into a southern belle, a sister named Antonia (Maureen O’Neil). 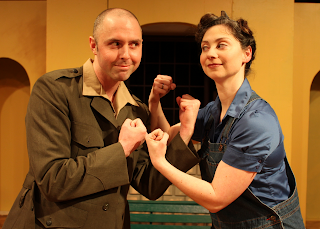 Much Ado About Nothing is a double love story. Claudio (Ken Luce) loves Hero (Leah Sitzes) and vice versa, but both manage to feel betrayed thanks to the lies and machinations of Don John (Jeff Hirschberg), the evil, deposed brother of the stalwart senior officer Don Pedro (Bobby Brown). Meanwhile, Hero’s cousin Beatrice (Kathryn Philbrook) and Claudio’s comrade in arms Benedick (Brian Jansen), carry on a love/hate relationship fueled by witty, acerbic puns, word play and insulting banter. But it’s a comedy, so everyone ends up happy and together by the end.
Traditionally, Beatrice and Benedick make or break Much Ado, since their interchange is at the heart of the verbal comedy. In this case, those two definitely made it.
From the second Philbrook’s Beatrice saunters on stage and opens her mouth you know exactly who she is; a smart, sassy, sexy, self-assured woman who would these days be called an upper hand feminist. She was absolutely endearing to watch and listen to, with facial and body English so clear it would have conveyed her message even without words. It was a flawless performance. Jansen as Benedick had me worried, playing the first scene a bit over the top, but he quickly settled in and turned in an equally outstanding and complex performance. Their chemistry and synergy made them a delight to watch together.
I won’t go into the whole cast, as it was a large one, other than to say the entire ensemble, to a person, was excellent. However, indulge me to highlight just a few more actors if you will. 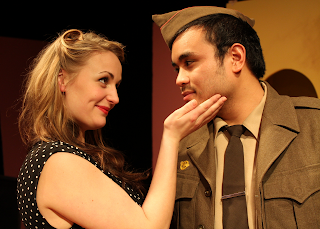 Hirschberg created an unusually believable Don John with a dark, understated, but realistic mien that made him far better than the usual two-dimensional character most productions offer. Like a genuine con man, he made us believe his entreaties to Claudio and his brother Pedro even though we knew of his nefarious plan. Brown’s Don Pedro was an equally well crafted character, bringing excellent clarity (he’s saddled with a lot of the exposition, and did it superbly) along with a very military bearing. He was so likeable that you understood his men’s loyalty.
Perhaps the most unusual characterizations, and certainly the funniest shtick, belonged to the team of Dogberry (Alyssa McElfresh) and “his” sidekick Verges (Priscilla Zai). Dogberry is a cowardly, pompous constable whose constant malapropisms expose a need to seem more educated. In what may have been the most daring and successful director’s change, this Dogberry is played by a woman (McElfresh), playing a man, playing a Southern sheriff who is more spongy than tough and more comic than stern.
She arrives and leaves on the back of a tricycle driven by Verges, a hangdog, taciturn sidekick who spends her time focusing on crossword puzzles and occasionally interjecting very short, astute comments. Zai played Verges by physically and verbally channeling Tex Avery’s cartoon character Droopy Dog, right down to the voice, mannerisms and superior attitude of that beloved character. Both actors were absolutely delightful, entertaining, and quite funny.
As for the production values, the lighting and set were both very adequate and nonintrusive, which in Shakespeare is a good thing. Costumes were uneven and less than stellar, but again, when good Shakespeare is before you, that’s a minor issue. The one thing I wish had been better was the blocking; several times lines of sight were obscured from where we sat, and I suspect from other seats as well.
If you go (and you definitely should) wear light clothing. The theater is actually as hot as New Orleans, and they know it. They are currently raising funds to add much needed air conditioning, and they’ll ask you to contribute. Come to think of it, maybe leaving the room that hot was a clever move.
Much Ado About Nothing
Feb. 24th through March 18th 2012
Olympia Little Theatre

http://www.olympialittletheater.org/
Posted by Alec Clayton at 8:11 AM