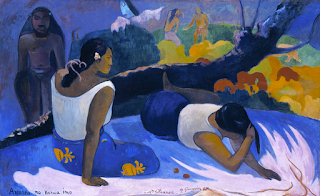 It's the biggest thing since the Picasso show. It's Gauguin and Polynesia: An Elusive Paradise at Seattle Art Museum. If that can't make Tacomans head north for an afternoon nothing can.

Paul Gauguin is one of the greatest and most romanticized artists of the modern era. His story - abandoning family and a successful business career to find a primitive paradise in Tahiti - is as romantic and far-fetched, yet mostly true, as the story of his good friend Vincent Van Gogh cutting off his ear. And like Van Gogh, Gauguin made paintings that were as revolutionary and exciting as anything yet seen in Europe.

Gauguin said he was going to Tahiti to faithfully record in his paintings the culture and the landscape of the island, but what he painted was not an accurate recording. It was something much better. It was his highly romanticized version of the people and the island replete with symbolism and myth and lessons learned from the Impressionists and African and Polynesian sculpture. And it was stupendous.

SAM is the only United States stop for this landmark show highlighting the complex relationship between Gauguin's work and the art and culture of Polynesia. The exhibition includes about 60 of Gauguin's brilliantly hued paintings, sculptures and works on paper, which are displayed alongside 60 major examples of Polynesian sculpture that fueled his search for the exotic.

Much of the Polynesian wood carvings appear as exotic today as they did at the end of the 19th century, and the history as told in wall texts and in an available audio tour is fascinating. But what's truly amazing is Gauguin's paintings and woodcut prints; and what makes them amazing is something so simple it is astounding - his sensitivity to color and space and the beauty of the people and the landscape of the islands.

I could describe the way he value keys his colors and contrasts acidic blues and greens and reds and purples. I could talk about how the colors in many of the earlier paintings done in Brittney - the first gallery in the chronological exhibition - are subdued and chalky but with an inner fire as if the brilliant colors to show up later are just dying to burst loose, but to describe it means nothing. Neither does looking at reproductions. We've all seen many reproductions of Gauguin's paintings, but they are nothing like the living colors on his canvases.

In looking at these paintings the influence artists such as Van Gogh, Manet and Corot had on Gauguin is clearly evident, as is the influence he had on later artists such as Picasso and Matisse. In the later paintings in particular trees and sky become swaths of color with very little detail and figures are integrated so beautifully with the landscape that in places they almost disappear. In some of these paintings, such as "Reclining Tahitian Women," women are accompanied by totemic gods and it almost looks like the carved gods and the flesh and blood women are carved out of the same materials. Such paintings forecast early 20th century works by Matisse and even the current figurative work of Phillip Pearlstein.

This is beyond a doubt the biggest art exhibition to come to Washington since the great Picasso exhibit at SAM.

The museum has extended hours for the Gauguin exhibition. There are also many specials programs, lectures and tours. Visit the SAM website for more information. Expect large crowds.
Gauguin and Polynesia: An Elusive Paradise