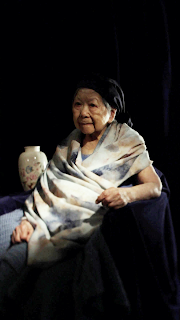 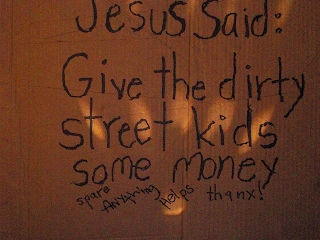 The theme of the 10th Annual Biennial at Tacoma Art Museum is identity, described by the museum as "a vision of regional identity that revolves around how communities interact, intersect and overlap."

These interactions, intersections and overlaps extend in intriguing ways to resonances between the works of art, many of which are coincidental or are byproducts of similar interests and concerns by artists working in the same region and in the same time. Such resonances are highlighted by strategic placement in the gallery. For instance, images of redacted government documents face photos of censored writing in a book and of a redacted tattoo on a man's arm. The image from the book is an enlarged photo. Near it is the actual book displayed in a glass case, which sits in front of a series of photos of the edges of abandoned and empty commercial signs which, coincidentally, repeat the angular forms of Jeff Jahn's sculpture, "Canopy II" that hangs on an adjacent wall. Such juxtapositions can be seen throughout the show. They are the result of happy accidents and the keen eye of curator Rock Hushka.

The show leans heavily toward installation art, photography and video with very little traditional painting or sculpture. Among the painters represented are Tacoma-area artists Jeremy Mangan and Juliette Ricci.

Mangan, a Foundation of Art Award winner, is represented by two paintings, "Tent City" and "Trojan Horse." The former is a small acrylic painting of a circle of multi-colored tents surrounding a campfire. The latter is a gigantic painting of the Trojan horse, his hide painted in such a way as to look like hundreds of photos of old buildings stapled onto his side. People who are familiar with Mangan's work will recognize these buildings as typical of the ancient and weathered buildings that show up in many of his paintings (this painting or version of it was shown at Fulcrum Gallery in 2010). The scale is impressive and the brittle surface quality is mesmerizing.

Ricci is represented by three works: "Hustler," "No Rest for the Weary" and "We Are Our Brothers Keeper." All are paintings on panel with photo-collage and writing. The writing is moving and poetic and the painting is juicy.

Among the more fascinating works are a series of videos by Susie J. Lee called "Still Lives" with subtitles indicating the subject, such as "Still Lives: Helen," a portrait of an elderly woman named Helen who doesn't speak and barely moves. This and similar videos by Lee are like Renaissance portrait paintings but with contemporary subjects and high-definition digital imagery.

Another very fascinating piece is Sean M. Johnson's "Family Portrait," an old couch suspended high on a wall and held there, literally, by Scotch tape. This thing defies gravity and represents the most archetypal of family images, the family gathered on the couch to watch TV. And one must wonder: is the family held together by nothing more substantial than Scotch tape?

This biennial exhibition is highly conceptual in nature. It's not just pretty pictures; it's a collection of thought-provoking interdisciplinary works that require long and careful study. For your own enlightenment and enrichment, please do not rush through this exhibition. Read the wall labels and take the time to really look at the work.
10th Annual Biennial