Love in the Northwoods 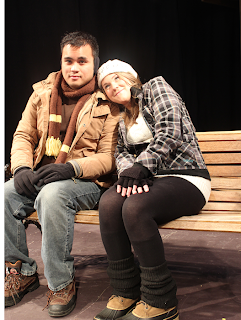 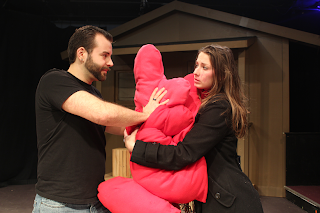 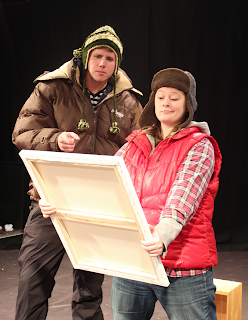 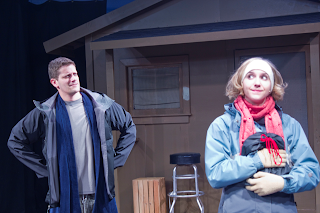 
For starters I must say I enjoyed “Almost Maine” at Olympia Little Theatre as much as I had hoped and far more than I had expected.
I would have expected even less had I discovered this little tidbit of information from a New York Times article: “It closed a month after it opened Off Broadway. Entertainment Weekly selected it as one of the worst shows of 2006.” And then it became a phenomenal success in schools community theaters across the country. If I had read that before braving a snowy night to see it at OLT I probably wouldn’t have gone. I probably would have expected something like “The Best Christmas Pageant Ever,” which everyone else seems to love but which I hated.
But “Almost Maine” is nothing like that. It is funny. Really, really funny. And touching and sad and poignant. It was cleverly written by John Cariani of “Law and Order” fame (Google him if you don’t know who he is.)
Tim Shute does a fine job in his directorial debut with a cast of actors that is new to me. The only one of these actors I’ve seen before is Ken Luce, whom I saw in “Love, Sex and the IRS.” A lot of the others were in “Welfarewell” and “A Few Good Men,” neither of which I was able to review. (Shute was also in “A Few Good Men.”)
It’s an ensemble piece and it is difficult to single out any single actor. They were uniformly outstanding. From a back-woodsy couple trying to sample the joy of kissing to a pair of dumb jock types questioning relationships to a hippie-dippy chick carrying her heart in a bag and traveling to the primitive Northwest to say goodbye to her recently dead husband whose spirit is being carried away by the northern lights — every one of these actors inhabit their roles with expressiveness and a sense of naturalism that is convincing and delightful. Never mind that some of the things they do are absolutely absurd, magical, stupid or unbelievable — and in some of scenes all of those combined — these actors make their characters totally believable.
“Almost Maine” is a series of eight short stories of vignettes with eight actors playing 18 different characters - plus stage manager Vanessa Postil, who appears briefly as a bartender but is not credited in the program and did not take a curtain call. The actors are: Logan Cheyne, McKenzie Cifford, Jason Downer, Korja Giles, Ken Luce, Brittni Reinertsen, Steve Bocke, and Priscilla Zal. There are no connections between the different scenes other than they all take place at approximately the same time on a cold winter night in the fictitious little town of Almost Maine, and each of the stories is about love.
One of the most interesting and delightful things about Cariani’s writing is that many of his vignettes are based on the clever idea of taking metaphorical statements literally. When people fall in love they fall on the floor, when hearts are broken they’re… well, you’ll see; and if you’re waiting for the other shoe, well, you’ll see.
“Almost Maine” is sweet without being cloying. It is absurdist, yet underlying the absurdities are truths about the workings of the human heart. I highly recommend it.
WHEN: 7:55 p.m. Thursday-Saturday and 1:55 p.m. Sunday through Feb. 5
WHERE: Olympia Little Theatre, 1925 Miller Ave., NE, Olympia
TICKETS: $10-$14, available at Yenney Music Company on Harrison Avenue (360-943-7500) or  http://www.brownpapertickets.com/producer/2313
INFORMATION: 360-786-9484, http://olympialittletheater.org/
Posted by Alec Clayton at 8:54 AM

Wonderful show; I agree with every word of this review.

The script is awesome and the cast brings it with great chemistry. I love this play so much that I probably will venture to Olympia High School this weekend to see it again.