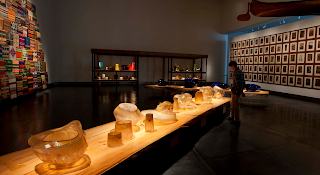 I went to a gallery tour Q&A with Dale Chihuly at Tacoma Art Museum Thursday morning, and while I enjoyed the Q&A with Tacoma's most famous artist, the things that really knocked me out were 1) Chihuly's collection of Edward S. Curtis photographs, 2) the two Willits canoes suspended from the ceiling (much more impressive than the silly cars hanging from the ceiling of the Seattle Art Museum, 3) the Virna Haffer exhibition in the adjacent gallery, and 4) a huge painting (untitled) by William Ivey in the Safeco collection exhibition.

I've got to get back to TAM. There was not enough time Thursday to see all the wonderful art on display. There are three new shows at TAM, and one of them - Chihuly's - takes up all of two large galleries. This is a mind-blowing amount of art all in one place.

Readers who have followed my columns over the years know I have mixed feelings about Chihuly. He's like the nursery rhyme girl. When he's good, he's very, very good. And when he's bad he's horrid. There's a lot of both in this show. Among the best things are the surface decoration (essentially abstract expressionist paintings) on many of his blown glass baskets and cylinders. And did you know he is an avid collector of just about everything from Native American crafts to bottle caps? He shares large chunks of his collection in this show, including one huge wall of Pendleton blankets and another entire wall of Curtis photographs. And all of it is beautifully and tastefully displayed - kudos to curator Rock Hushka and his team for a great job.

If Chihuly is Tacoma's most famous artist, Virna Haffer is our least known. "Virna Haffer has been an all too well kept Tacoma secret," said museum director Stephanie A. Stebich. From the 1920s until her death in 1974 she was one of America's leading and most inventive modern photographers; yet she has somehow been lost to history. I for one am overjoyed that TAM has searched out a large sampling of her work for this show.

Haffer brings to mind the great Man Ray. She's that relentlessly innovative. Her surrealistic imagery and experimental distortions of figures and scenes are both daring and aesthetically pleasing. On display are works representing an amazing range of experimentation from overlapping images and strange viewpoints and even photos done without a camera in a process called the photogram (the same process Man Ray called a Rayogram). "Her artistic curiosity is palpable in her work, which in itself is staggering in its volume, diversity and range," said curator Margaret Bullock.

Finally, there is the exhibition from the Safeco collection featuring some 400 works by Northwest artists donated by Safeco Insurance. Included are works from established giants the likes of Guy Anderson, Kenneth Callahan and Morris Graves and more contemporary stars such as Michael Brophy and Michael Spafford. Is this the best collection anywhere of Northwest art? I don't know. If it's not it certainly runs a close second to anything else. The big painting by Ivey that I mentioned in the opening paragraph is one of the most impressive abstract paintings I've seen in a long time.
Posted by Alec Clayton at 3:00 PM