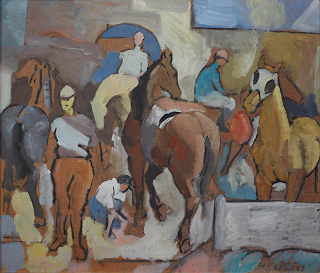 Over the past four years, Tacoma Art Museum has acquired more than 400 new works. Many of them were gifts from the Safeco Insurance Company collection, and many of those are currently on exhibit.

Check it out. There's some good stuff here.

The first thing to catch the eye is a large oil painting by Pacific Northwest icon Guy Anderson called "Skimming the Sea." At 6 feet by 6 1/2 feet, with bold, oblong, white forms marching like an army of fish nets across the surface, this is a strong image to welcome viewers to the show.

Works of many styles and media are included: photos, paintings, glass, sculpture; and various degrees of realism, surrealism and abstraction.

There is a nice glass piece by William Morris that stands out because it is so atypical of Morris's work. It is called "Rocks," and it consists of a group of smooth glass stones in a clear green color with incised images of fronds and hieroglyphic-like markings.

The best sculpture by far is a wall-hanging glazed ceramic piece by Paul Martinez called "Bird Series: Cup #3." It is a flattened cup in a large Plexiglas frame that looks like a regular coffee cup, only huge, that has been squashed flat. The surface markings are varied and expressive.

By far the most striking of the abstract paintings in the show is William Ivey's untitled painting that dominates the back wall. It's also the largest painting in the show at nearly 7 1/2 feet by 9 1/2 feet. The sparkling flat surface modulations and subtle color changes in this painting are a feast for the eyes.

I also enjoyed Walter Isaacs‘ "Horses in Paddock." This large painting is like one of Degas' famous racetrack paintings, except that the forms are flatter and there is a tight interweaving of horses and riders as everything juggles jigsaw-like for position in shallow space. Parts of figures and animals seem to separate out and then come together again as you're looking at it. There's a horse to the left that separates into two separate figures; the tail and hind legs become one form that overlaps the separate form of the horse's head and neck. Next to it stands a jockey whose legs and feet look like a horse's legs and hooves. I'm looking at a photo of the painting as I write this, and the longer I look at it the more little surprises I find.

There's a very funny and beautifully composed black and white photograph by Paul Dahlquist called  "Rounds (Michael Taylor)." It is a picture of a nude man seen from the back standing in front of a table full of ceramic pots. The reason it is funny is because the man's butt looks like another of the pots. That's also why it is beautiful, because that is an inspired composition that creates artistic harmony by juxtaposing totally unlike objects (flesh and clay) that nevertheless look very much alike.

William Hoppe's "The Mute Siren" is another excellent abstract painting which interweaves a number of similar forms - forms within forms. There is a square made of smaller light gray and white squares inside a field of light brown, and it is overlapped and interspersed with rows of red, yellow and orange squares, and behind all of this are almost invisible circles.

A similarly effective hard-edge abstraction that is more luminous and which creates an impression of fast movement arrested is Francis Celentano's "Alternating Curve of Isis." I also very much enjoyed the Matisse-like "Untitled (Seated Woman)" by Peter Camfferman, though it is derivative.

There are a lot of marginally good artworks by a lot of marginally famous artists in this show. The show is not intended as a survey of Northwest art of the past century, but it serves as such pretty accurately given the omission of a number of major figures. There are no Mark Tobeys, Fay Jones or Michael Spaffords, for instance, but there is that marvelous William Ivey and the big Guy Anderson.
Collecting for the Future: The Safeco Gift and New Acquisitions