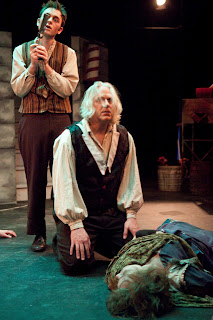 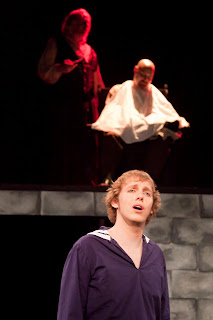 I usually avoid comparing shows at different theaters because such comparisons can be unfair, but sometimes they can be enlightening.

For example, the last time I saw “Sweeney Todd: The Demon Barber of Fleet Street” was at Olympia’s Capital Playhouse. The cast included two outstanding professional actors, at least one of whom – Tony Award-winner Jarrod Emick – has had starring roles on Broadway in “Les Misérables,” “Miss Saigon” and “Damn Yankees.”

Yet, the performance of this modern classic by Steven Sondheim at Lakewood Playhouse holds up quite well in comparison.

The music and acting are comparable, as are the amazing costumes and zombie-like makeup.

Karen E. Christensen is intense and comical as the grotesquely droll Mrs. Lovett, a frumpy and flirtatious old dame who makes meat pies out of very fresh meat.

This is a very tough role to play. It calls for instantly and believably going from sweet to bitter and it requires a voice strong enough to sing duets with seasoned opera star Glenn Guhr (starring roles in Seattle, Tacoma and Bellevue Operas) in the title role of Sweeney.

I cannot praise Guhr’s performance enough. With a handsome, craggy face and long flowing silver hair, he appears larger than life. As I was watching him perform and listening to his powerful voice, I could not help comparing him – not with the great Emick from the Capital Playhouse production, but with Philip Quast as Inspector Javert in “Les Misérables.”

Other outstanding actors in the Lakewood Playhouse production are Steve Barnett as Anthony Hope, Niclas R. Olson as Tobias Ragg and Rochelle Morris as the unnamed beggar woman.

Anthony sings beautifully and Olson’s acting is nuanced. Tobias is a complex and conflicted character who is in distress throughout much of the play, and Olson makes the audience feel Tobias’ pain. Morris has little to do other than beg for alms and make obscene gestures toward the men, but she does it with such outlandish style that she is a joy to watch.

There is a large company of singers who appear in a variety of roles as the denizens of the city. They lend this intimate production the feel of a major Broadway show. Their movements are hauntingly choreographed (no choreographer is listed in the program, so I must assume credit goes to director Jim Brown and possibly fight director Alex Smith).

The costumes by Hally Phillips are great, and so is the makeup, though no one is credited with it. Perhaps the actors did their own. Someone did an amazing job of making an attractive young actress, Morris, into a disgusting old hag and another quite attractive actress, Samantha Camp, into the epitome of the living dead.

Credit also must be extended to musical director Brian Galante and his orchestra for their performance of Sondheim’s complex and captivating music.

“Sweeney Todd” is a dark and mesmerizing operatic musical about murder, obsession and revenge sprinkled with moments of much-needed comic relief.

It is a play everyone should see at least once if not more – but it is not entertainment for young children or squeamish adults.

Don’t be put off because, like me, you saw and were disappointed by the movie version with Johnny Depp and Helena Bonham Carter.

This week in my blog you can find a review of “Play On” at Olympia Little Theatre. And coming up later this month: reviews of “Proof” at Tacoma Little Theatre by guest reviewer Michael Dresdner, and “Summer in the Sixties” at Harlequin Productions’ State Theater in Olympia.
Posted by Alec Clayton at 5:02 PM