Hot time, summer in the city 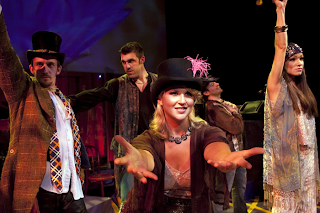 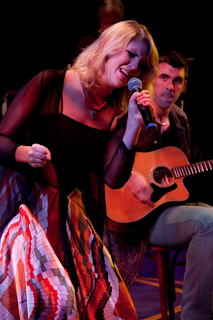 Kate Dinsmore and Michael Lengel
Review "Sixties Kicks"
“Summer in the Sixties” is Harlequin Productions’ rocking tribute to the best music of the era that shall forever more be characterized by the phrase sex, drugs and rock and roll. What a selection of songs! What a cast! What a band!
Harlequin’s summer rock shows are legendary, from “Dancin’ in the Aisles,” where half the audience jumped to their feet and boogied in front of the stage; to “Sixties Chicks,” a tribute to girl singers the likes of Carole King, Joni Mitchell and Diana Ross; to last year’s “Sixties Kicks,” a precursor to the current show highlighting songs by The Rolling Stones, The Beatles and The Beach Boys - that was a knockout. Hell, they all were. And this summer’s offering may be the best of them all.
For starters, it hast an almost identical cast to last year’s “Sixties Kicks,” with the exception that instead of the great Antonia Darlene this show has Christian Doyle, who can’t be compared with Darlene because he’s a different type of singer, but who really rocks the house. The other cast members are Kate Dinsmore, Michael Lengel, Alison Monda and Matt Posner.
The band is also practically identical: Rick Jarvela lays down a throbbing bass line; Maria Joyner rocks an insistent drum beat; Brad Schrandt is on keyboard and horns; and musical director Bruce Whitney on keyboard plus a mean acoustical guitar and even a surprise vocal solo on The Grateful Dead’s “What a Long Strange Trip It’s Been” – plus new addition Daven Tillinghast on guitar.
My one criticism of their previous sixties music revues was that some of the music was a little too polished, i.e., not raw enough, and that the costumes for “Sixties Chicks” looked more like musical theater costumes than authentic sixties garb.
Those problems have been overcome in spades with this show. The costumes by Kathleen Anderson are wilder and more authentic looking. (A note of explanation: some purists searching archives of hippie clothing might say these are not strictly authentic either, but they perfectly capture the feel and spirit of the wildest clothing of the era. One thing that is not authentic is that the men have short hair, but I think it was a wise decision not to have them wear long-hair wigs, which would have probably looked phony.)
And the music is loud and often guttural with raspy screaming voices that easily flow into more mellow tones highlighted by Tillinghast’s wailing guitar. This music has the raw edge that is usually missing when musical theater people try their hand at rock.
The song selection focuses mostly on the late sixties, with a heavy dose of psychedelic music. There is a wide-screen projection compiled by Jill Carter at the back of the stage with historical video clips and psychedelic light images that tell stories of the time – particularly the politics and the war in Vietnam, with a special homage to the Peace Corps, which was born in 1961 and celebrated its 50th anniversary this year.
Posner sets the mood for the evening with hard-driving hits like The Lovin’ Spoonful’s “Summer in the City” and Santana’s “Black Magic Woman” with a great guitar solo by Tillinghast.
Doyle lightens the mood with his lilting rendition of “In the Summertime” (see how well they milk the show’s title). Doyle’s comical gestures, facial expressions and dance moves throughout are a joy to watch – this is not a play, it’s a musical revue, but the cast members do assume characters and prove that they are experienced actors as well as singers.
Act 1 reaches a crescendo with Monda’s wild rendition of “I’ll Put a Spell on You.” In previous reviews I have written about Monda’s broad vocal range. We saw evidence of it again in her recent performance in “I’m Into Something Good” at Centerstage. But in this show, and especially on that song she does things I didn’t think were possible with the human voice. She screams and grunts and warbles melodically, and holds notes until you think she’s going to pass out; and she does it all with perfectly clear enunciation and grace. And it’s all kicked up to a higher level with great sax and guitar solos and highlighted by an animated projection of reluctant Army inductees getting their physicals and marching off to war, done in the style of Terry Gilliam’s “Monty Python” cartoons.
The mood shifts to breathtakingly lyrical when the five-person cast harmonizes beautifully on Crosby, Still, Nash and Young’s “Judy Blue Eyes” – a song almost everyone remembers, not by its title but by the repeated refrain “I am yours, you are mine, you are what you are. You make it ha-aard.”
Lengel shines brightly on the Doors’ “Break On Through to the Other Side” and later an Dylan’s “The Times They Are A Changin’” and Dinsmore channels Janice Joplin on “Me and Bobby McGee.” She makes it her own and not an imitation of Joplin, but she does get a lot of Janice’s unique vocal inflection right down to hints of her East Texas twang.
After a huge standing ovation opening night the cast came back for multiple encores. The audience didn’t want to let them leave the stage and the cast and band didn’t want to stop the music. This is fabulous entertainment for a summer time out on the town.
WHEN: Thursday-Saturday at 8 p.m., Sundays at 2 p.m. through July17
WHERE: State Theater, 202 E. 4th Ave., Olympia
TICKETS: $34 - $37
INFORMATION: 360-786-0151; http://www.harlequinproductions.org/
Posted by Alec Clayton at 9:30 AM