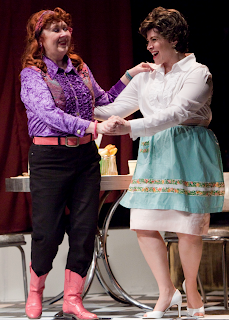 Opening night at Tacoma Little Theatre’s “Always... Patsy Cline” was one of the most enjoyable evenings of musical entertainment since this same show played at Centerstage in 2008.

After seeing the same show at different theaters, it is always tempting to compare. I usually avoid that temptation, but here I’d like to say that if you saw this show at Centerstage and loved it, I can promise you that this one is just as big a kick – same wonderful songs, same spot-on acting and singing (Cayman Ilika as Patsy at Centerstage, Emilie Rommel-Shimkus at TLT) and the same outrageous humor from Patsy’s friend, Louise (Kate Jaeger at Centerstage and Sharry O’Hare at TLT). You’ll love O’Hare’s take on a downhome Southern gal and Rommel-Shimkus’s mellow and plaintive voice, and the true love between the singer and her number one fan will bring a lump to your throat.

When Louise invites Patsy into her kitchen, there is the feeling that we in the audience are being invited in as well, to smoke cigarettes, drink coffee and talk through the night about spouses and children and hard times. The homey feel is as natural as the set with the chrome-edged table and black-and-white linoleum floor (set design by director Micheal O’Hara).

The story by Ted Swindley is based on actual events. Louise Seger was a huge fan of Patsy Cline, and she met her hero one night when Patsy was playing the Esquire Ballroom in Houston. She invited the singer home after the show, and they became close friends. Over the next three years, they exchanged heartfelt letters, then Cline was killed in a plane crash, at just 30 years old.

Louise tells the story, speaking directly to the audience during most of the play, but occasionally acting out scenes with Patsy, who rarely speaks but rather tells her story through song. And what wonderful songs they are – hit tunes including such greats as “Back in Baby’s Arms,” “I Fall to Pieces,” “Walkin’ After Midnight,” “Sweet Dreams” and “Crazy,” plus standard classics such as “Won’t You Come Home Bill Bailey” and “Blue Moon of Kentucky,” and wonderful religious hymns such as “Just a Closer Walk with Thee.”

With a dark wig, bright red lipstick and wonderful costumes, Rommel-Shimkus captures the look of the famous country singer. Her costumes by designer Michelle Graves run the gamut from traditional and showy country outfits to a prim pink 1960s suit. She captures her mannerisms well but does not so much try to imitate Patsy’s voice as interpret her songs in her own way. On the ballads she sounds more like Patsy, but on the more upbeat tunes she sounds more like herself, and does not, for instance, even attempt the yodeling on “Lovesick Blues.” Her voice is more round-toned and subtle than Patsy Cline’s with a husky, sultry quality that is particularly effective on “Walkin’ After Midnight” and the very soulful “Faded Love.”

O’Hare plays directly to the audience, encouraging audience members to sing along on some songs and even dancing with one man in the audience. (Avoid aisle seats if you’re afraid of audience participation.) She throws herself into the role, she is thoroughly engaging and she nails the Texas drawl. It’s impossible not to love O’Hare’s Louise.

Both actors capture the essence of their characters while still expressing their own personalities, and both seem to thoroughly enjoy themselves.

Director Micheal O’Hara (no relation to Terry but married to Sharry despite the different spelling of their shared last name) doubles as a stagehand in a cowboy outfit and manages to inject subtle humor into his job of moving a microphone on and off stage.

I left the theater with “Bill Bailey” in my head and woke up the next morning with those great songs still in my mind, wishing I could go back and see the whole show again.