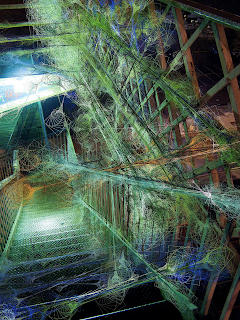 Published in the Weekly Volcano, December 22, 2010

I don't pretend to understand or even care about the science or math behind John Fisher's art at Mineral. There are nine digital prints on the wall and one interactive audio-visual presentation. The digital prints are beautiful and fascinating. In layman's terms they are time-lapse photographs. The other thing, which he calls the "Number Tree," is an animation played on a television monitor that is hooked up to some kind of high-tech computer and a soundboard contraption.

In the interactive piece, viewers enter a series of numbers into the computer and the numbers generate animated pictures of trees and leaves and snowflakes. To math geeks it may be fascinating, but visually the images are boring. Not so the prints. They are terrific. The colors and shapes are electric. They are photographs, but he calls them and the show "Algorithmic Drawings". The photos are of industrial scenes with streaks and bursts of light created by long exposures of moving lights and perhaps other techniques. The photos were all taken in Seattle and Tacoma.

"Tideflats Ghost Semi" is a time-lapse photo of trucks passing by a warehouse. The lights from the trucks create a dense network of swirling filaments overlapping the architectural structure of the warehouse in the background, which is almost obliterated by the brilliant light streaks. We have all seen time-lapse photos of car lights; they are usually streaks that logically follow the direction in which the cars are going. But the streaks of light in Fisher's photos explode and crackle into amazing strands and bursts like electricity in a mad scientist's lab.

"Ghost Semi Diptyc"h is another version of the same photo. In this case there are two photos mounted one above the other. In the top photo there are very few of the light effects. The warehouse building is in sharp focus and there are a mere three horizontal and parallel streaks of light at ground level. In the bottom photo the lights explode more like in "Tideflats Ghost Semi," and the building almost vanishes behind the bursts of light. In "Murray Morgan Bridge", Tacoma the lights on the stairs beneath the Murray Morgan Bridge swirl into strange spiral cones like some kind of deep space wormholes and almost everything is tinted with a deep, electric blue-green.

Numbers march up and down the sides of buildings and seem to hang in the air on long cables in "Seattle Public Library". I haven't the slightest clue as to how he created this image, but it is beautiful. It is a lot like the images in the television commercial that has numbers buzzing all around people's bodies. The perspective in this shot of an alley is disorienting, as it is in another fascinating work called Overpass Moss. All of the photos are solidly designed and full of crackling energy, and the colors are great.

Twice in this column I have indicated that I am not interested in his technique. For those who may be more curious there are printed sheets of information available that provide some explanation, but I like the mystery of not knowing. It enhances the magic and wonder of the images.

Beside those that are framed and for sale, there are a lot of unframed and reasonably priced photos in a bin at Mineral.

Note: If you see this show you will notice that the titles on the wall labels don't all match those given here and on the gallery website. "Murray Morgan Bridge" is called "Green Spiral Stairs" on the wall label and "Seattle Public Library is called "Alley Numbers, 2010."