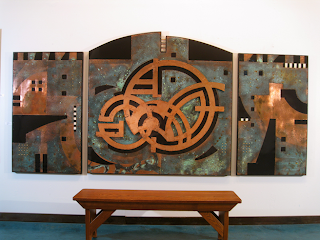 A year ago a jury of arts professionals chose a proposal by Seattle artist Dan Webb for 10 bronze sculptures meant to represent speaking bubbles like those used in comic strips. Called Thought Bubbles, each piece would be two feet tall and they would hang on pillars outside City Hall. A 40-inch thought bubble sculpture would be inside the building. The whole thing was budgeted at $180,000. People were outraged. Letters of complaint poured in and the city council turned down the proposal.

Now, a year later, the arts commission and selected jurors and a citizens' advisory panel have chosen four less controversial works of art to go inside the building with a slimmed-down budget of $35,000 - and actually the selected works came in some $15,000 under budget at $20,505 for the four art pieces. But that was not good enough for the council, which voted to table the vote until the Jan. 4 meeting.

At least one council member, Karen Rogers, complained about spending so much money in these lean economic times despite the fact that the budget was already approved and purchase of art is required by law in the Art for Public Places program, which mandates that one half of one percent of the construction budget for public buildings be used to purchase artwork.

There was also some question about "Street Corner Passing" by artist Lela DePaolo, a collage that included pictures of people taken at Olympia's Arts Walk. The question was did the artist have permission from all the people in the photo-collage - a non-issue because photographers don't have to get permission for photos taken at public events.

The whole thing is getting ridiculous (see comments from local artists posted on the Volcano's blog Spew).

Personally, I thought the "thought bubbles" looked silly, although the idea was kind of cool, and I'm glad that work wasn't installed. On the other hand, it might be appropriate for a town where the local collage boasts of its geoduck school mascot. Come to think of it, given the opportunity to vote, I'd cast my vote for a giant geoduck sculpture in front of City Hall.

As for the newly proposed work, I haven't seen much of it, but I have seen other works by some of the selected artists and they are safe and non-controversial.

The Olympia Arts Commission did what they should have done in selecting work. They used a time-honored selection process and reached out to the public. If anything, they went overboard in trying to please everybody - which, of course, can never be done and should never even be tried. As for the city council, they have displayed a shameful level of trepidation.

After seeing what Tacoma has done by way of public art recently - most notably the Spaceworks program and the newly installed "Projecting Drop" by Jill Anholt at Pacific Plaza - I am embarrassed by Olympia's lack of vision. Tacoma is showing some guts and creativity while Olympia is stuck in the muddy muck of conformity. (Coincidentally, I just received an announcement that the Tacoma Arts Commission just approved funding for 21 different arts projects, and in contrast to Karen Rogers in Olympia, T-Town's commission chair Sarah Idstrom said funding such programs is "particularly important during the current economic downturn."

Meanwhile, the Olympia City Council gets another chance Jan. 4 to vote on public art for City Hall. It would be nice if they could start the New Year by approving a modest proposal of art that will enhance the new building and not offend anyone.
Posted by Alec Clayton at 11:19 AM