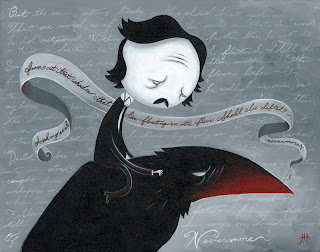 Published in the Weekly Volcano, November 10, 2010

"THE RAVEN": Acrylic on canvas by Justin Hillgrove

In last week‘s column I made a distinction between fine art and illustration. That distinction applies to Justin Hillgrove's paintings at Mineral featured in a show with a title both clichéd and appropriate: Black, White and Read All Over.

As illustrations for books and movies, or homages to the same, the paintings in this show are entertaining and well executed; but as fine art - not so much. The defining differences in this case are the overall composition and the relationships between figure and background. In a narrative sense the figures and backgrounds relate, but visually they seldom do. The figures are inventive and delightful, but the backgrounds are ... well, just backgrounds.

Hillgrove is showing a group of small acrylic-on-canvas paintings illustrating some of his favorite books and movies, and all done in a style associated with Hello Kitty and Japanese anime married to macabre sci-fi. They're very cute in the way Tim Burton movies are cute. The drawing is precise, the paint application is smooth and almost flawless, and his color choices and subtle modulations are beautiful. The paintings are all in tones of black, white and gray with touches of red (or, in some cases, all in red with touches of gray). These colors lend a softly menacing quality to the pictures.

Among my favorites are two based on the Harry Potter books titled "Expecto Patronum" and "Priori Incantatem." Harry is a round-faced cartoon, but he's still recognizable as Harry. Same goes for "Boo's Escort," a homage to Harper Lee illustrating the scene in "To Kill A Mockingbird" when Scout escorts Boo Radley home.

The most fully composed in the sense of integrating figure and background is "Lullaby," an illustration of a kid (he looks like a character in "The Simpsons") having a horrendous nightmare. My favorite literary homage is the painting of Edgar Allen Poe riding a raven as if it were a horse. Notice especially how subtle the red on the raven's beak is.