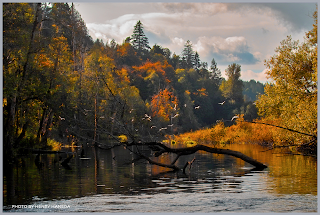 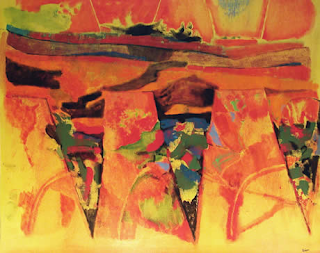 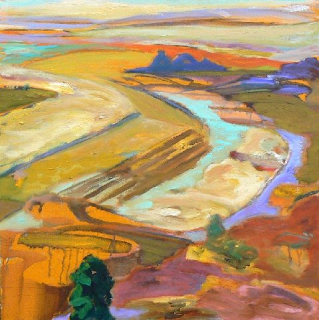 Published in the Weekly Volcano, November 24, 2010

The latest show at Mavi Contemporary - the new gallery next door to The Grand Cinema - features two painters, one photographer and one craftsman. The painters are William Turner and William Quinn, the photographer is Henry Haneda. The craftsman is also Haneda. He makes exquisite handmade objects, including fly rods and pocket knives. The fly rods are as beautiful as any I've ever seen. I held one and tested its flexibility, and it felt like air in my hands. Imagine landing a trout with one of those lovelies.

Haneda's photographs are mostly landscapes with brilliant colors and extra-sharp focus.  The one exception, which looks nothing like the others, is a close-up of ice on a road that is a nicely designed abstract in super-sharp focus. Only the sharp focus puts it in the same camp with the others. Most of his pictures look like calendar art. They're impressive but not as impressive as his craft items.

Both of the painters are showing abstract works based primarily on landscapes. Quinn, whose opening show at Mavi I reviewed just a couple of months ago, paints large abstractions with compositions reminiscent of Matisse, and in some instances of Rauschenberg, and in one powerful Northwest scene called "Object of Sound," of Marsden Hartley. There is an amazing variety of style in his work. Perhaps a bit too much. The works in his earlier show were more stylistically consistent, and I thought it was a better show.

The Northwest scene I mention above has huge boulders fronting a body of water with harsh contrasts and layered colors that are quite intriguing. My favorite painting in this show is another Northwest scene called "Henderson Bay" (acrylic on paper), with nice washes and delicate line work and beautiful toned-down colors. A newcomer to the area - he spent most of his working life in Europe - Quinn has captured the essence of Northwest light and scenery in this little painting.

Turner is featuring a suite of new paintings in "the vault." (I didn't know it, but the building must have been a bank at one time because there are two walk-in vaults that I never before knew were there. I guess the vault doors were never opened when Two Vaults Gallery was in that space, but in retrospect the name should have been a give-away.)

But I digress. Back to the Turners in Mavi's vault. There are 15 small Turner landscapes in this room. They are expressive and colorful. Although he lives in Tacoma and not San Francisco, Turner's paintings put him squarely in the school of art known as the Bay Area Figurative Movement. Earlier Turner paintings I'm familiar with show a strong Diebenkorn and Thiebaud influence, especially in the way he tilts perspective upward to flatten space.

The paintings in this show are not so carefully constructed. They look to be more slap-dash, finish-in-one-sitting paintings. That is somewhat deceptive, however. A few of these paintings were dashed out quickly, but most were more purposefully composed than they appear. They draw you in with their bright colors and expressive brushstrokes, but keep you engaged with their solid composition. There are a couple that don't hold together as well as they should, but most are excellent.

This show won't be up much longer, so see it while you can.
William Turner, William Quinn and Henry Haneda