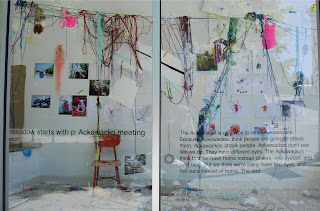 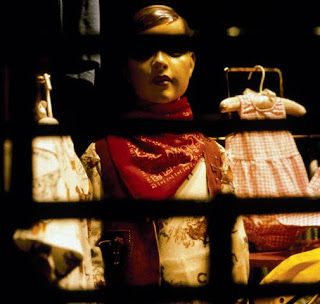 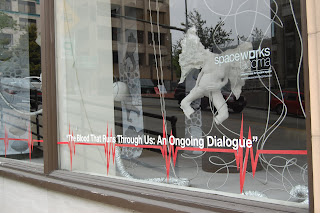 Artscapes by Spaceworks by City of Tacoma


Top: "meadow starts with p: Ackawacko meeting" by Andrew Peterson, Angel Brain and Snake Puddin’ in the Woolworth Windows
Center: photo by Joseph Songco in the Woolworth Windows
Bottom: “The Blood That Runs Through Us…an Ongoing Dialogue” installation at 950 Broadway by Mary Coss, Pam Hom, and June Sekiguchi
photos courtesy Spaceworks Published in the Weekly Volcano Aug. 5, 2010
The Spaceworks program is the kind of thing that’s sure to put Tacoma on the map. You can no longer think of T-town as the stepchild of Seattle when it has things like this — open spaces and empty buildings enlivened with visual art, music and performance art. And not just any old art either, but the kind of art that makes dull and close-minded people scratch their heads and say WTF?

No way can I review all of it in this column.

Let’s start on Broadway with Lisa Kinoshita’s installation in the Woolworth Window. It’s called Jack’s Epitaph. It is a weird kind of stage set wherein an actor could sit behind a desk (I envision either a too-tight suit or in a 10-gallon hat and sporting a big mustache) and tell the story of Jack the domesticated bear who freely roamed the streets of Tacoma until a trigger-happy policeman blew him away. Jack’s head looks down on the desk.

Next comes Gretchen Bennett’s window installation. Some kind of white fabric or skin with black, red, green and yellow stripes is stretched across a wall of black plastic and lighted by red an ambler lights. It resonates with Jack the bear because it is shaped like a bearskin rug, and it is probably very beautiful when lighted at night, but you don’t get that effect in the daylight. Bennett said, “One of the main points of my installation is that I asked Sierra Stinson to install a kit of elements I made, so that the idea of window dressing was intact.”

Carrying on the theme of window dressing, Joseph Songco has installed a set of mysterious photographs of window displays in New York. In each of the high-contrast, dark photos of show windows (clothing stores, a bridal shop, a religious artifact store) there are manikins or dolls partially hidden behind bars or blinds.

The final window is meadow starts with p: Ackawacko meeting by Andrew Peterson, Angel Brain and Snake Puddin’, which is as enigmatic as its title. It’s a maze of threads, drawings and other objects scattered randomly as a tribute to energetic play and childlike creativity. Many of the drawings are by Peterson’s children. The whole thing is playful but very messy

A block away at 906 Broadway are window installations by Ben Hirschkoff, Michelle Acuff and Tory Franklin.

Franklin’s Firebird installation is elegant and magical like an illustrated storybook or Medieval manuscript, with words and images from cut digital vinyl print on cut pvc, vinyl and tyvek (a synthetic material).

Acuff’s window is filled with a filigree of curvilinear forms in what looks to be pink Styrofoam. Standing on the floor behind these is a big blue deer with huge antlers that look like a profusion of tree limbs. The color combinations and similarities between the meandering shapes in the window and the antlers make for a powerful image.

Hirschkoff has constructed a landscape of clouds made of glass and metal pipe — the softest and most ephemeral of forms made from hard industrial materials.

I’ve barely touched on the many works in the program. For more information Google Spaceworks Tacoma or search for them on Facebook.

Note: the installation by Mary Coss, Pam Hom, and June Sekiguchi is not reviewed in this column. I hope to review it and other installations that are a part of this program at a later date.