Review “Rosencrantz & Guildenstern Are Dead” and “The Fifteen Minute Hamlet” 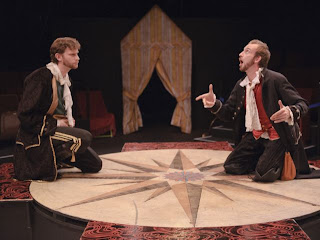 Published in The News Tribune, Aug. 4, 2010
Pictured: Bryan Bender, left, as Guildenstern and Christian Doyle as Rosencrantz from "Rosencrantz and Guildenstern are Dead" at Lakewood Playhouse
photo by John Pfaffe

There’s a new theater company in the South Sound. It’s called The Outfit Theatre Project, and it includes some of the best-known actors, directors and designers in the area. The Outfit is affiliated with Lakewood Playhouse and Tacoma Little Theatre.
"We are already getting the chance to do what we love, what feeds us, with the people who challenge and inspire us the most, and that's why The Outfit was created to begin with,” said Deya Ozburn, the group’s press secretary. “We want to help grow theatre as a voyeur sport, as a more interactive entertainment option then going to a movie on a Friday night. Don't get me wrong, we're nuts for film, it's a beautiful medium, but what we are trying to help the other live theaters accomplish is the survival of the traditions of entertainment reaching back to say the Irish Seanchaí: storytelling in such a way that you feel a part of the action. "
The Outfit is doing Tom Stoppard’s, modern classic “Rosencrantz & Guildenstern Are Dead” at Lakewood Playhouse. As a bonus, “R&G” is preceded by Stoppard’s “The Fifteen Minute Hamlet.”


“The Fifteen Minute Hamlet” is performed in the manner of “The Complete Works of William Shakespeare (Abridged).” It is an insanely funny condensation of “Hamlet” played for broad laughs. Alex Smith plays the title role with hilariously contorted physicality and includes at least one pratfall that will surely leave him bruised if not crippled. Smith is supported by a madcap ensemble cast, many of whom stay in character for “Rosencrantz & Guildenstern.”

The beauty of doing these two shows together is that the opening15-minute skit makes it much easier for the audience to understand the main play because each play in its surrealistically comic way retells the story of the mad Danish Prince Hamlet. The short version turns Shakespeare’s great tragedy into slapstick comedy, and the larger story turns it into an absurdist investigation of logic and language. Stoppard’s writing is inspired, and as performed under the direction of Erin Chanfrau it is like “My Dinner with Andre” meets the Marx Brothers.
Rosencrantz (Christian Doyle) and Guildenstern (Bryan K. Bender) are dead (or are they?). For that matter, is Rosencrantz really Rosencrantz and is Guildenstern really Guildenstern? They keep calling one another by the other’s names while playing games with words and with the laws of probabilities in a kind of intellectually challenging game of who’s-on-first while replaying (and reversing) their roles in the tragedy of “Hamlet.” Doyle plays Lou Costello to Bender’s Bud Abbott. As in most comedies, the straight man (Bender) does not get the laughs or the accolades, however, in his seriousness and intensity Bender is a superb equal half of the equation. And in typical comic-duo fashion, Doyle gets to play the bumbling fool, and he gets most of the laughs. His facial expressions – mostly variations on open-mouthed befuddlement – are terrific.
Ozburn as The Player, the leader of a traveling theater troupe, is the lynchpin among the large cast of supporting characters. She comes across as strong and confident in the role. Even though her character was written by Stoppard as a man she is often referred to with feminine pronouns (mostly by Rosencrantz and Guildenstern, who can’t seem to get anything right).
Outstanding in the ensemble cast are Blake York as one of the nameless tragedians and Anjelica Wolf in another gender-bending role as Alfred, the young actor who is forced to dress in drag – in this case a woman playing a male actor playing women’s roles.
The broad physical comedy and the impeccable timing in this play is a testament to the skills of the director and the actors. Smith, by-the-way, tones down his physical comedy just a tiny bit in "R&G," knowing that the wild slapstick from the opening skit would be too much in the context of the longer more intellectually teasing play, and Bender and Doyle emphasize timing and verbal delivery over physicality – except for in one huge fight scene in which the entire cast goes wild. This scene has to be seen to be believed. While 13 actors (seeming like 31) run, jump and fight in fast synchronized movement two characters rush across the stage carrying a large carriage wheel between them, and Doyle leaps over wheel. The coordination and timing of the movement in this scene is astonishing.
“The Fifteen Minute Hamlet” is pure slapstick that sent the opening night audience into nonstop laughter; “Rosencrantz & Guildenstern” is much more challenging and thought provoking, but equally funny.
WHEN: 8 p.m. Friday and Saturday and 2 p.m. Sunday through Aug. 15, plus actors’ benefit performance Aug. 7 at 2 p.m.
WHERE: Playhouse,
TICKETS: $15-$23
INFORMATION: 253-588-0042, www.lakewoodplayhouse.org
Posted by Alec Clayton at 7:25 AM