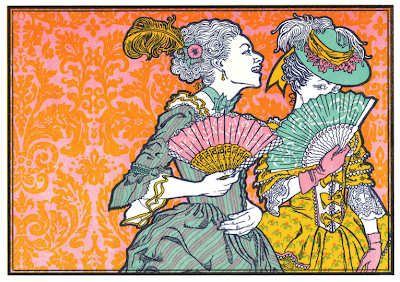 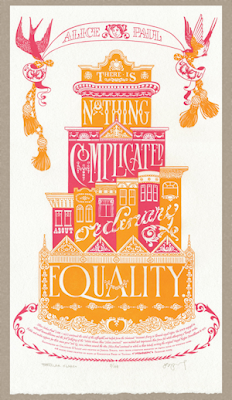 O’Leary, who runs Anagram Press in Tacoma, makes handmade books, letterpress prints and textile work; her work includes illustration, graphic design, textiles, and drawing, and her books and prints are collected and exhibited internationally. Representative samplings of all these works can be seen in the library reading room.

Most interesting to me are her sketchbooks and a series of letter press prints called the Feminist Broadside Series, which she did in collaboration with fellow graphic artist Jessica Spring. The feminist broadsides feature quotes from historic figures such as Elizabeth Cady Stanton and Eleanor Roosevelt done in elaborately decorative type with a variety of type styles and sizes that all fit together into unified designs.

The Eleanor Roosevelt quote is used in a poster called "Victory Garden," which she did right after the 2008 election. I know that because it says so right on the poster. It features a picture of the White House, tomatoes on the vine and root vegetables growing in the ground. The quote is “The future belongs to those who believe in the beauty of dreams.”

The title refers to the World War II Victory Gardens, a project of Mrs. Roosevelt’s, and reflects the culmination of a dream as seen in the election of Barack Obama. (Interestingly, nobody knew at the time this work was created that Michelle Obama was going to plant a garden on the lawn of the White House).

Another work in the series pictures 19th century-style row houses stacked up to look like a wedding cake in brilliant orange and fuchsia. Printed on it is a quote from suffragette Alice Paul: “There is nothing complicated about ordinary equality.” These broadsides were designed by O’Leary and printed by Spring’s Springtide Press.

In an adjacent display case are more feminist quotes, in this case hand embroidered and appliquéd. Also shown are displays of her materials and tools; handmade artist’s books; the cover of the most recent issue of Tacoma’s City Arts magazine, which O’Leary illustrated; and a number of sketchbooks.

The drawings in the sketchbooks show a good eye and a well controlled hand. Most of the drawings are figure studies. One that I particularly liked featured a classic reclining nude on a hillside overlooking a mountain village with little houses with red clay tile roofs. The figure is slightly distorted with an exaggeration of jutting hips and sketchily drawn with a sensitive pencil line. Most of the foreground is a black and white contour drawing, and half of the background is painted with what appears to be water colors. The contrast of dense “finished” areas and broader “unfinished” areas makes this little drawing look like it wants to be much larger. I can easily imagine it as a wall-size mural.

O’Leary’s graphic style reflects a tradition in illustrated manuscripts and book art that goes back to about 600 BC and which may have reached its modern apotheosis with Art Nouveau and the works of artists such as Audrey Beardsley and Gustav Klimt.

Thanks for the great review, Alec. It's funny you mention the sketchbook-as-mural idea; I'm working on doing just that, in the Woolworth Windows downtown. Come check it out sometime!

Thanks, Chandler. I'll try to get by and see the installation in the Woolworth window. My friend Ruby Re-Useable also has stuff in the WW windows.