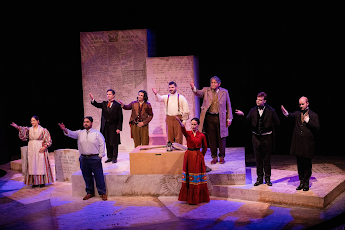 From my Oly Arts article on Harlequin Production’s Sovereignty:

Sovereignty is a historical drama about Native Americans written and directed by Native Americans and performed by an ensemble of Native and non-Native regional and local actors with direction, set, costume and lighting design by Native artists who have been brought to Olympia from cities all over the United States.

On returning to her homeland, a young Cherokee lawyer, Sara Ridge Polson (Josephine Keefe), balances personal life at work and with her family and friends with the strain of arguing before the United States Supreme Court the repeal of a long-standing law that makes it illegal for law enforcement by the Cherokee Nation when a non-native comes onto Cherokee land and commits a crime—specifically and most egregiously rape of a Cherokee woman. If she wins her case, it will confirm the Nation as a sovereign nation. And if she loses, she will lose the rights her family worked and died for.
Brilliantly, playwright Mary Kathryn Nagle (Cherokee Nation of Oklahoma) and director Esther Almazán (Yaqui/Yoeme) alternate scenes during the presidency of Andrew Jackson (Avery Clark in a dual role also as the white man who becomes Sara’s fiancé). There are interesting parallels between scenes from different centuries in which, in many ways, nothing has changed. There are lessons to be learned here.
Harlequin has recruited professional actors from all over the country, and every Native American character is played by a Native, while white characters such as Andrew Jackson and Sara’s fiancé are played by white actors. Six of the nine cast members play two or more parts. Keefe is outstanding in the role of Sara Ridge Polson. Kenneth Ruthardt (Mescalaro Apache) is mesmerizing as the Cherokee elder dubbed “Major Ridge” by President Jackson. Nathan Rice, billed as “white chorus man,” who plays a contemporary barkeep and a vicious 19th century cop, two very different characters played convincingly.
The set by Tommer Peterson and lighting by Olivia Burlingame are outstanding. Sovereignty runs approximately two-and-one-half hours including a 20-minute intermission.
In the lobby is a show of artifacts lent and curated by the Squaxin Island Tribe Museum.
Harlequin no longer requires proof of vaccination or a negative PCR test to enter the State Theater, but all patrons are still required to remain masked while in the theater space.
For more background information read the Oly Arts article:
Celebrating Sovereignty at Harlequin Productions | May 3, 2022 | by Alec Clayton
WHAT
Sovereignty
WHERE
Harlequin Productions at State Theatre, 202 4th Ave. East, Olympia
WHEN
7:30 p.m. Thursday-Saturday,2 p.m. Saturday and Sunday May 5-28
Thursday, May 19 7:30 PM - Pay What You Choose
COST
$35, Senior/Military $32, Student/Youth $20
LEARN MORE
https://harlequinproductions.org/
Posted by Alec Clayton at 9:56 AM