By Alec Clayton
Note: This review was supposed to be published in The News Tribune, but since all area theaters have been shut down due to the coronavirus it will not be. 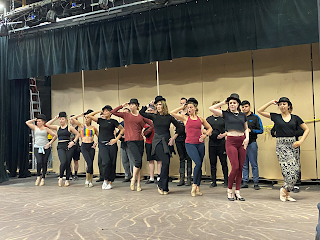 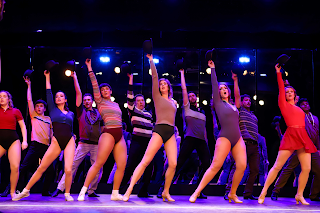 You might remember the 1985 movie of “A Chorus Line” with Michael Douglas as Zach the director. You might have seen it on Broadway in the 1970s. Chances are you’ve forgotten just how good it was. Tacoma Little Theatre is now giving local audiences a chance to remember.
“A Chorus Line” is rarely performed by community theaters for the simple reason that it is too hard to do. It requires a large cast of beautiful young people (and one middle aged man) who can sing, dance and act with knock-’em-dead skill and an incredibly talented director and choreographer. TLT’s Eric Clausell is more than up to the challenge as both director and choreographer. Add to that a fabulous set by Blake R. York and lighting by Niclas Olson, and you’ve got a show worthy of another Broadway revival.
The set is an empty stage with a back wall of mirrors that rotate to become a black wall and another set of mirrors that are brought onstage to create five stunning reflections of Whitney Shafer in the most marvelous dance performance of the night.
It’s a chorus cattle call with a stage crowded with dancers – some veterans and others starry-eyed wannabees – filling every inch of the stage while auditioning for a part in the chorus. But the director, Zach (Michael O’Hara) demands more. He wants them to open up about their personal lives, which they reluctantly do in sometimes tortured speeches and in song and dance.
Sheila (Heather Malroy), a jaded Broadway veteran who acts like she’s bored with the whole thing, reveals a sad childhood in which ballet was her only escape. She sings the haunting “At the Ballet” and is joined by Bebe (Lisa Kelly) and Maggie (Cynthia Ryan) who also used dance as an escape from a sad childhood.
A couple of the men come out as gay at a time when coming out was much riskier than it is today and when internalized homophobia was common.
Val (Melanie Gladstone) talks about how despite being a great dancer she could never get cast because she was flat chested and, in her estimation, ugly. So she had reconstructive surgery and became successful. Her tale leads to the hilarious and sassy song-and-dance number “Dance:Ten; Looks: Three” about her beautifully augmented body parts.
Cassie (Shafer), whose star shone briefly on Broadway and then in Hollywood can no longer get cast in anything and is reduced to begging for a job in the chorus, and in one of the more poignant and dramatic scenes in the play it is revealed that she and Zach have a troubled past together, which sheds light on why he is more demanding of her than of any of the others in the audition. The scene with Zach and Cassie arguing about their relationship while incongruously everyone else sings and dances behind them is a bit sappy and unrealistic, but it leads to Shafer’s wonderful solo dance.
Finally, Zach asks of all the hopefuls why they want to be in the chorus and speaking for them all, Diana (Keola Holt) sings the spellbinding “What I Did for Love” with a voice that is wonderfully clear and bell-like.
The entire cast is outstanding, each standing out as an individual while fitting in with the chorus, and their interaction in movement, song and speech is like pieces of an intricate moving jigsaw puzzle. This is a production that should not be missed. It is recommended for ages 12 and older and has flashing light effects, adult language and sexual suggestiveness.

UPDATED INFORMATION FROM TACOMA LITTLE THEATRE AS OF 3/13/2020

It is with a heavy heart that Tacoma Little Theatre is cancelling our shows through April 23, 2020.  Based upon recommendations from the government, regional sources, and our board of directors, it is in the best interest for the health and safety of patrons, artists, staff, volunteers, students, and all who come through our doors, that all public performances and classes will be cancelled.
If you had purchased a ticket to A Chorus Line you will be contacted by the box office staff within the next few days.  We will offer you the following ticketing options: