Man Out of Time: Student written Musical at PLU 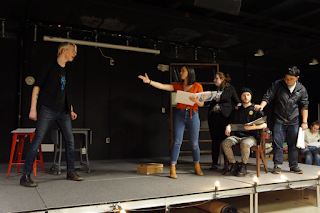 The student written and student performed musical Man Out of Time will be performed this weekend only at Pacific Lutheran University. A production three years in the making, Man Out of Time, is written and produced by senior Gunnar Johnson, directed by Kylie Steves, with music written by Gunnar Johnson, Megan Johnson, and Carl Johnson. The musical is the story of Dr. Sherrie Amberson.
After being hired at the secretive Finistech Institution, she discovers the journal of a brilliant scientist who mysteriously vanished and was erased from all other records. As she tries to piece together the narrative of the scientist's life, it becomes evidently clear that no one can give her the full story. When the Institution comes crashing down on her and her investigation, who will Sherrie trust? 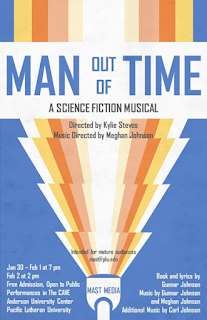 “When I began working on this show, I had no preconceived ideas. However, when we began rehearsals, I was excited to see the actors take their characters and make them come alive. It’s cliché, yes, but it’s true. This show has never been produced before and for me, it’s been an amazing experience. I will admit, that when I was asked to do this show, I was a little concerned. I’ve only directed one other show and it was a lot shorter. However, putting this show together over the last four weeks has been so much fun and I’m grateful for the opportunity