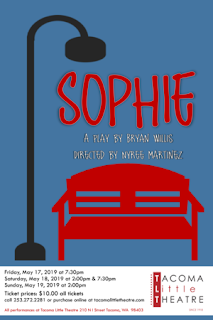 Bryan Willis’s play Sophie is coming to Tacoma Little Theatre for a special performance one weekend only, directed by Nyree Martinez.

Known locally for his many local, national and internationally produced plays, Willis is now playwright-in-residence at Northwest Playwrights Alliance at the Seattle Repertory. His plays have been workshopped and produced off-Broadway, on the London fringe, throughout the U.K., Israel, and in theaters across the U.S. and Canada, including ACT, New York Theater Workshop, Seattle Rep, Milwaukee Rep, Unseam’d Shakespeare Co. and Riverside Studios in London.

Sophie is a one-act show that takes place at an outdoor railway station, where a young Sophie (age 13) talks with her older self (age 19). At age 19, Sophie was due to direct and produce a play at the Edinburgh Fringe (Scotland) but died before this ambition could be realized. In the ensuing weeks, her family decided to found a charity in Sophie’s name to give financial support to needy students of acting and of singing – ‘Sophie’s Silver Lining Fund.’ The charity published a book of Sophie’s own writings entitled Sophie’s Log – thoughts and feelings in poetry and prose. A few years later the trustees commissioned a playwright to write a short play based on Sophie’s Log.

The play was commissioned by Sophie's Silver Lining Foundation (patron sponsor - Judi Dench) and premiered at the Edinburgh Festival. “Soon after, I was commissioned to adapt the work for BBC Radio 4 and had the great pleasure of being part of the production process in Manchester,one of three BBC studios devoted solely to new radio theater,” Willis says.

“Sophie's family have become life-long friends and I couldn't have written the play without their  encouragement and support. I've been to Sophie's house at least 15 times over the years and  the family has visited here in Olympia many times, too. Their foundation (Sophie's Silver Lining  Foundation) has raised hundreds of thousands of pounds dedicated for scholarships for students of drama and music. The play has been one of many projects developed to raise money for this worthy cause.

“I tried to write the play in the theatrical style she advocated (similar to my own views), and with respect for who she was and what she still means to so many people. But it's not a play about Saint Sophie. She was a typical school girl in some ways, with many moments of absolute brilliance. The plot and story of the script are based on a poem she wrote at the age of 18, "On Being Alone at a Railway Station," which appeared to be written from the point of view of a spirit. ‘

Willis says he is delighted to be reunited with his colleague, director Nyree Martinez, and he thanks TLT's artistic director, Chris Serface, “for taking a chance on a lesser-known work written by a local playwright.”