A staged reading at Tacoma Little Theatre
By Alec Clayton
Published in the Weekly Volcano, Jan. 24, 2019 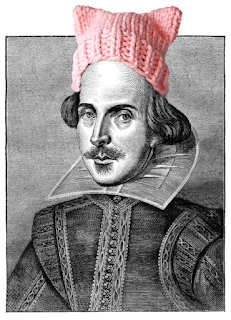 More than 100 years ago William Shakespeare wrote a play, Measure for Measure, about the power differential between men and women. Inspired by the #MeToo movement, actor, writer and director Christian Carvajal wrote an adaptation of Measure for Measure that will be performed as a one-night-only reading at Tacoma Little Theatre.
TLT Artistic Director Chris Surface, who is also one of the actors in the reading, says, "TLT's Off the Shelf program is a wonderful opportunity for pieces that might not fit into a normal season for us. It gives directors an opportunity to play with topics and treatments and work with actors who might not be able to commit to a full run of a show. When Carv brought his idea for Measure to Measure, I knew it would be a great fit."
Carvajal says, “I'd never seen or read a production of Measure for Measure before 2017, but I read about a surge of interest in the play as a result of the #MeToo movement and found that intriguing. The moment I read it I understood the connection and resolved there and then to produce a reading of it. It's often categorized as one of Shakespeare's ‘problem plays’ because its conclusion is seen as ethically unsatisfying. Duke Vincentio (Andrew Fry), ostensibly the play's moral center, wraps up the plot in a way that seems counterproductive to the legitimate goals of its heroine, Isabella (Cassie Jo Fastabend, memorable as Ophelia in New Muses Theatre Company’s recent productions of Hamlet and as the title character in Lisistrata). I think the lesson we've learned over the last few years is men cannot be counted on to cede power and treat women fairly.”
Typical of Elizabethan dramas, the cast is huge, and Carvajal has chosen some of the area’s best, including Fastabend, Serface, Fry, Jess Allan, Silva Goetz, Andrew Gordon, Xander Layden, Gabriel McClelland, Robert McConkey, Kathryn Philbrook, John Pratt, Mason Quinn, Drew Doyle, Jed Slaughter, Amanda Stevens and James Wrede.
Fastabbend says, “I consider finding relevance in scripts a crucial job as a theater artist, especially when working with Shakespeare. In Measure for Measure, there unfortunately isn't a lot of digging that needs to be done to reveal how strikingly similar the characters and story are in today's MeToo era. As an actor and feminist, one who has been subject to sexual manipulation and assault like so many other colleagues and friends, I find deep and important resonance in Isabella's voice. She stands up for herself against all odds, demanding to be heard regardless of the consequences: ‘Most strange, but yet most truly, will I speak... it is ten times true, for truth is truth to the end of reckoning."
Fray says, "Several things excite me about performing Measure for Measure for Tacoma Little Theatre's Off the Shelf series. First, though I have enjoyed several Off the Shelf performances I have never done one.  Secondly, even after little over a half century of acting in countless plays, this will be the first time I will be doing Shakespeare. Finally, it is a blast working with Carv."
Fry has performed in more than 45 productions in the South Puget Sound area including three at TLT last season, as Herod in Jesus Christ Superstar and Tupolski in The Pillowman.  He was last seen as Scrooge in Scrooge the Musical at TLT and as Callahan in Broadway Olympia's Legally Blonde, and Alfie Doolittle in Tacoma Musical Playhouse’s My Fair Lady.
Carvajal says the lessons Shakespeare wrestled with in Measure for Measure are questions we’re still wrestling with in 2019.
Measure for Measure, a staged reading, 7:30 p.m., Jan. 31, $10, free to TLT season ticket holders, Tacoma Little Theatre, 210 N I St., Tacoma, 253-272-2281.