This Is Me, Debbi, David

Amanda Kemp will join me for a reading of my latest novel, This Is Me, Debbi, David at Browsers Book Shop in Olympia, Washington Thursday, Sept. 13 at 7 p.m.

Most recently seen in Animal Fire Theatre’s The Winter’s Tale, Amanda is a new local actor. In addition to her second year with Animal Fire's Shakespeare in the Park, she's been working on such projects as voice-over and film work with ICF International, various film works with Malicious Wallydrags and playing Tracey Sprockett, the face of the Olympia Film Society. This will be her very first author reading, and she says she is thrilled to have been chosen (and I am thrilled she accepted my invitation). 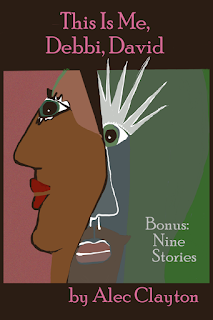 This Is Me, Debbi, David is a story narrated by the two main characters, Debbi Mason and David Parker, told in alternating chapters by Debbi and David. Debbi (whose part will be read by Amanda) is a self-declared loudmouth, fun loving, rabble rousing, perverse woman. David (read by the author) says he has always been something of a nebbish little mama’s boy who never took a chance on anything in his entire life. When Debbi breaks up with David and runs off with a man she thinks can provide wealth and security, Debbi and David each embark on adventures that are, in turn, romantic, funny, enlightening and scary—adventures that take them from the French Quarter in New Orleans, to Dallas, and to New York City’s East Village. And into their own hearts.

What the reviewers have to say

“Because of the natural beauty of Alec Clayton’s prose, and the flow of the narrative, it is easy to miss the stunning craft this writer has mastered over nine fine books.” – Ricker Winsor, author of Thinking Out Loud and Tic Tok: Poems

“Clayton has mastered the task of getting inside his characters’ heads.” – Ned Hayes, author of The Eagle Tree.

"Alec Clayton at his best. He presents the reader with two lead protagonists, each with a compelling account of the year after their break-up. Major dramatic questions emerge early on: 1. how will the beautiful and exotic Debbi survive a violent situation and why can't she seem to escape her Texas entrapment; 2. will David be able to follow his bliss amid the bizarre, quirky, sometimes evil, sometimes lovable characters who give him a lift along his journey to New York; and 3. will Debbi and David ever meet up again? Try as you might to anticipate the answers, I predict you will be surprised. Truly a great read. Expertly crafted!" - Morrison Phelps, author of Bluebird Song.

Book discussion and signing to follow the reading. I hope to see you there.