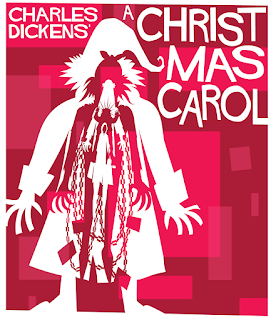 Never does a Christmas season come and go without some local theater doing a version of A Christmas Carol. Doing the honors this year is Lakewood Playhouse with an adaptation written by Playhouse stalwart James Venturini. Popular local actors to inhabit the Dickensian world this holiday season include Joseph Grant as Ebenezer Scrooge; Gary Edwards, memorable as Riff-Raff in The Rocky Horror Show, as the Ghost of Christmas Present; and a host of other local actors.
Playhouse Artistic Director John Munn promises this one will showcase “all of the wondrous and magical elements of this classic Christmas story that has thrilled and charmed generations for centuries.”
Venturini says, “It's a non-musical adaptation. Modern audiences are mostly familiar with the tale through the many film adaptations and some annual stage presentations by large theatres; I wanted in this adaptation to give them a version as faithful to Dickens' original novella as possible, and preserve as much of his writing as possible while still making a lively and engaging play. We're using Dickens as the narrator, since he actually toured both Britain and the U.S. doing readings of his works during the last decade of his life.”
“Apart from that,” Venturini says, “I know that Alan Wilkie, the director, is interested in the ghost story aspects of the tale (which is, after all, subtitled "A Ghost Story of Christmas"), so in the adaptation I tried to craft the stagings of the four visits (Marley and the three Spirits) appropriately.”
It should be a rollicking ghostly tale.
Centerstage in Federal Way continues its holiday tradition of presenting English-style pantomimes, a.k.a. pantos. This year’s panto is Beauty and the Beast. For those who don’t know, pantos are a holiday tradition in London’s West End, the equivalent of our Broadway. They are loud, raucous children’s plays that also appeal to adults because of the sly jokes, local and pop-culture references, and bawdy double entendres that go right over the kids’ heads but which have their parents falling out of their seats with laughter. The kids love them because (1) they already know and love the stories and, just as much so as adults, love to see them mutilated for comic effect, (2) because of the outlandish stock characters, and (3) because there is always a lot of fun audience participation, and at the end they always throw candy to the children.
Pantos are popular fairy tales such as Cinderella, Jack and the Beanstalk or Beauty and the Beast retold with such stock characters as a good fairy who narrates the story and an evil character such as a witch who is usually played by man in drag, and a hero such as Prince Charming, who is traditionally played by a woman dressed as a man. Former Centerstage artistic director Alan Bryce, who comes from acting and directing in London’s West End, introduced pantos to Western Washington audiences in 2005 with a play about pantos, and Centerstage staged their first full panto, Cinderella, in 2007, so this year’s Beauty and the Beast marks the theater’s 10th anniversary of doing holiday pantos.
For a change, Tacoma Musical Playhouse is not doing a traditional holiday play this year. Instead, their holiday show is the ever-popular musical Once Upon a Mattress. But I hear TMP has tweaked the script to include a Christmas scene.
In addition to sneaking a Christmas scene into Once Upon a Mattress, TMP will have special holiday events including their first Holiday Bazaar, Sing Along with Santa and the Swing Reunion Orchestra – A Big Band Christmas!
The Holiday bazaar arts and crafts sale will be held Dec. 9 from 10 a.m. to 3 p.m. in the costume shop next to the TMP box office. Sing-Along with Santa is Saturday, Dec. 2. The Swing Reunion Orchestra’s show will be an evening of holiday classics played by TMP’s 18-piece big band Dec. 4 starting at 7:30 p.m. Tickets are $25.
A Christmas Carol, 8 p.m. Friday-Saturday, 2 p.m. Sunday, Nov. 24-Dec. 17, Lakewood Playhouse, 5729 Lakewood Towne Center Blvd. Lakewood, $20-$26, 253.588.0042, lakewoodplayhouse.org.
Beauty and the Beast, 2 p.m. and 7 p.m. Saturday and 2 p.m. Sunday, Nov. 25-Dec. 17, Centerstage, 3200 SW Dash Point Rd., Federal Way, 253.661.1444, 12-$35.
Once Upon a Mattress, 2 p.m. and 7:30 p.m. Friday-Saturday, 2 p.m. Sunday, Nov. 24-Dec. 17, Tacoma Musical Playhouse, 7116 6th Ave., Tacoma, 253.565.6867, https://tmp.org