I tell this Hemingway story better than Hemingway does, if I do say so myself.

It’s my favorite story about the great writer, but I had long since forgotten where I first came across it. Until yesterday when I found it while re-reading A.E. Hotchner's book Papa Hemingway. It had been more than 30 years since I read it, and I do not have perfect recall.
Here’s the way I’ve always told the story: 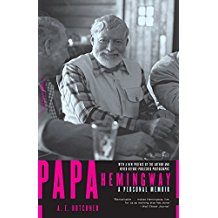 Hemingway’s editor, Max Perkins, was upset with the writer for using the word fuck, so he decided he had to talk to him about it. To remind himself, he jotted down a note on his desk calendar. Later, while he was out for lunch, his secretary came into his office looking for something and happened to glance down at his calendar and saw a note in the twelve o’clock block: “Fuck Hemingway.”

Here's the Hemingway-Hotcher version of the same tale:

“Max was too shy to say the word out loud so he wrote it on his calendar pad. … Along about three o’clock that afternoon Charles Scribner came into his office to consult him about something, and not finding him at his desk went over and looked at the calendar pad to see where he was. Opposite twelve o’clock, Charlie found the notation F-U-C-K. Later that afternoon, when Charlie did find Perkins as his desk, he said solicitously, ‘Max, why don’t you take the rest of the day off. You must be done in.’”

OK, maybe my version is not better after all.
Posted by Alec Clayton at 11:18 AM