This is my review of Lightfall by Christian Carvajal, recently posted on amazon.com. 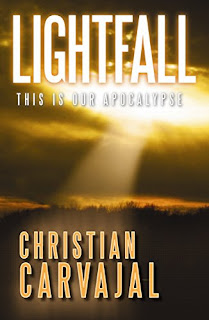 The first thing you need to know about Christian Carvajal’s Lightfall is that it is funny. The second thing you need to know is that it is true, not true in the sense of a dull recitation of historical facts but truth in spirit and intent (and for all we know and as you may discover when you get near the end of this book, it just might be a historical recitation of facts after all).

Lightfall is the story of the apocalypse, the rapture, the end of the world as we know it (or think we know it), as experienced by the denizens of Sugar Roses, Oklahoma, “where Jesus looks a lot like Kenny Loggins.” Sugar Roses, a fictional town, is the quintessential small town in the heart of the Bible Belt “clustered around a minor college campus but focused on its forty church spires,” where “five thousand families eat hearty suppers behind bay windows and unlocked front doors.” It is a town whose major industry is Saving Grace, Inc., purveyors of Christian novelty items and where you will find, not far away, a Christian nudist camp.

The story is cram packed with clever word play and pop-culture references, but right under the surface of all this playfulness is very serious theology and social study. In places, it almost but not quite becomes mired in didactic sermonizing or theorizing—but the author’s intelligence and wit saves it.

The core story of the people of Sugar Roses—including an atheistic womanizing college professor, a librarian, and a Hollywood script writer back home to write a script about Sugar Roses’ one and only notorious crime—is interrupted repeatedly and cleverly by emails, blog posts and stories from the local newspaper which paint a picture of the town and its reactions to the strange events that portend the coming of the end.

Unlike many of the other reviewers who have praised Carvajal’s depiction of characters, I think the book’s biggest drawback is that the central characters are not developed as fully as I wish they were. It’s a relatively short book, and I feel it could have benefited from an additional fifty or so pages to help readers get to know these characters even better. I tended to get lost in some of the asides and forget some of the major characters.

Overall, Lightfall is a unique, well written, enjoyable and thought provoking book. I highly recommend it for thinking people.
Posted by Alec Clayton at 1:02 PM