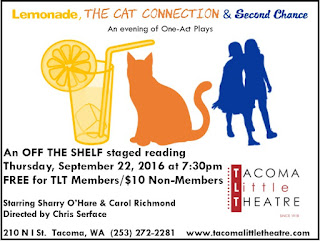 Tacoma, WA- Tacoma Little Theatre presents an evening of one acts for the first OFF THE SHELF of their 98th Season, on Thursday, September 22, 2016 at 7:30pm.  The production will be directed by Chris Serface.

Lemonade introduces us to a pair of Peoria matrons who seek respite from the doldrums of middle age by selling spiked lemonade to highway travelers and trading tales; Second Chance tells the story of a widow who has decided to begin a new life in the theatre and her married neighbor who tries to put a damper on her aspirations; and The Cat Connection which takes us to a park, where two older women have little in common—except they feed the same cat.

All three stories bring together the theatrical powerhouse of Sharry O’Hare and Carol Richmond, reuniting on the TLT stage for the first time since they were in Auntie Mame.