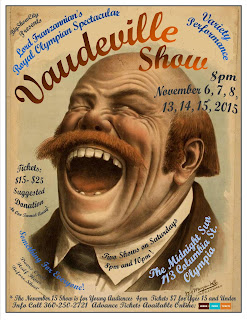 Lord Franzannian’s Royal Olympian Vaudeville Show is better than coffee in a cup of any color. It’s almost as good as the Sox winning the World Series and another Super Bowl victory for the Seahawks. Born out of old fashioned minstrel shows (minus the blackface) and the original vaudeville of the early 1900’s, Lord Franzannian’s is silly, funny, risqué and downright amazing. It song and dance, contortionists, mimes, jokes, and acrobatic feats of incredible inventiveness.
Elizabeth Lord is the founder and director of this entertainment bonanza, and she plays the part of host Lord Franzannian, who is more circus ringmaster than emcee. She welcomes everyone, tells them when it’s time to take a break and time to go home; and otherwise turns it over to a troupe of talented entertainers, including a band comprised of banjoist Jemmy Joe and bassist and kazooist (is that a word?) Al (ison) Metheny.
Hey, I didn’t make up those names; they did. And speaking of names, John and the Punishers, minus the Punishers, does a whole standup routine based on punning names like Nick, who is barely on time. It starts off clever and funny, but he beats it to death.
And who knew there were contortionists in Olympia? Not just one, but two: Jakob Tiger and Josephine. They perform separately, and it is painful to watch what they do with their bodies.
And there is burlesque—not one, not two, but three strip tease acts. I know that some modern burlesque performers don’t like to be called strippers, but it seems fitting here because at least two of them are lampoons on traditional strip tease. Zsa Zsa Bordeaux is rhythmical, languorous and sexy in a more traditional burlesque dance number. Momo La Vein’s “Sloppy Shimmy Burlesque” is a comedy routine with stripping that is laugh-out-loud funny despite poking fun at drunks. (Drunks are really not funny; they are sad at best.) The third burlesque number is a male stripper called Bananas Foster who comes out in an outlandish, futuristic costume and wielding a ray gun fashioned out of a dildo. He is funny and raunchy, and sexy despite having a not-at-all-Chippendale body.
Three of the really outstanding highlights of the show are the trio of performances by the duo of Jessica and Daniel Pitherin, who do a kind of hand jive with hands and feet, drumming in intricate rhythm patterns on various parts of their bodies, table, floor and plastic cups. They are amazing.
The Lenticulars, Jean and Fred, do an impossible-to-describe movement routine that combines mime, dance, contortion and rubber faces with clown makeup that is touching, sweet, and breathtaking in its originality.
Former Olympian now living in exile in Seattle Josh Anderson does a sad but funny song with hints of Gilbert and Sullivan about his tragic attempts at dating, and he revives his popular role as Saul Tannenbaum for a little tap dance number.
With 20 acts over a two-hour span, with a short intermission, I can’t include all of them here, so let me just mention two others: Cat Light Year’s spectacular “Electric Boogie” and Cody Hayman and Gabriella Miklulas’s “Cody Goes to the Doctor,” which will leave you crying with laughter if you don’t throw up first.
Lord Franzannian’s Royal Olympian Vaudeville Show is a benefit for Big Show City, a local non-profit performing arts organization (learn more about BSC at Amrisa.Loftus@gmail.com).

This weekend is your last chance:
Nov. 13 at 8 p.m.
Nov. 14 at 8 and 10 p.m.
Special performance for all ages Nov. 15 at 4 p.m.
Tickets Price: $15-$25 at the door (however, no one will be turned away at the door for lack of funds).
Appropriate for audiences over the age of 16. Special Youth Audience Show Ticket Price. *4pm Matinee on November 15th: 15 years of age or under: $7.00.  Tickets available at door night of show, or to RESERVE A SEAT buy a ticket online at http://www.brownpapertickets.com/event/2402100
Where: The Midnight Sun Performance Space 113 N. Columbia Street in downtown Olympia, WA.