What Kind of Books Do You Write?

Musings after the Puyallup Book Festival 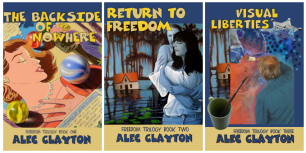 At Local Authors Day at the Puyallup Book Festival people kept asking me what kind of books I write. God, I hate that question! Even though, if the table were turned, that’s exactly what I would ask. As a matter of fact, I did ask that of a lot of the other authors who were tabling. They wrote Sci-fi, horror, political intrigue, and so forth. One of them wrote Jane Austin Fan Fiction. I guess that’s a genre now.
The thing is, if you say you write sci-fi or mysteries everybody knows what kind of books you write.
I write literary fiction, and nobody knows what the hell that is. Hell fire, even the people who write it don’t know what the hell that is.
Marketing experts say that if you want to sell your work you need to be able to say in a few words just what it is you’re trying to sell. You’ve got to be able to give a synopsis as an elevator speech. I’m not very good at that. Sometimes I say I write contemporary fiction, sometimes family sagas. Yesterday I told someone I write situational fiction. I also sometimes try giving examples of other writers who write similar types of books. The writer I refer to most often is Pat Conroy. We tell similar types of stories in similar styles. I was very flattered when reviewer Linda Linguvic wrote, “Move over Pat Conroy. There’s a new Southern writer in town” and followed up with, “Frankly, I loved this book and actually found it better than Pat Conroy's latest.” Thank you, Linda. (Interestingly, she had no interest in reviewing any of my later books; oh well, you can’t please all of the people all of the time.)
Another writer whose books might serve as a good example of the kind of books I write is Richard Russo. I aspire to his level of comic writing, but I’m not all about comedy by any means. I write about love and death and sexual harassment and racism. It’s deadly serious, but I do try to inject a dose of humor as well.
In addition to Conroy, reviewers have compared me to Eudora Welty, William Faulkner and Carl Hiaasen, and my books have been called Southern Gothic. I think those reviewers were really reaching to find some way to define my work; really, the only thing those writers have in common is that they are Southerners (although Hiaasen’s Miami is more New York/Cuban than Southern).
When it comes down to it, I guess what I should tell people when they ask what kind of books I write is that I’m just a story teller. Old timers sit around and tell tales about when they were young, about all the crazy characters they met or were. That’s what I do; I just tell tales.
Posted by Alec Clayton at 11:18 AM