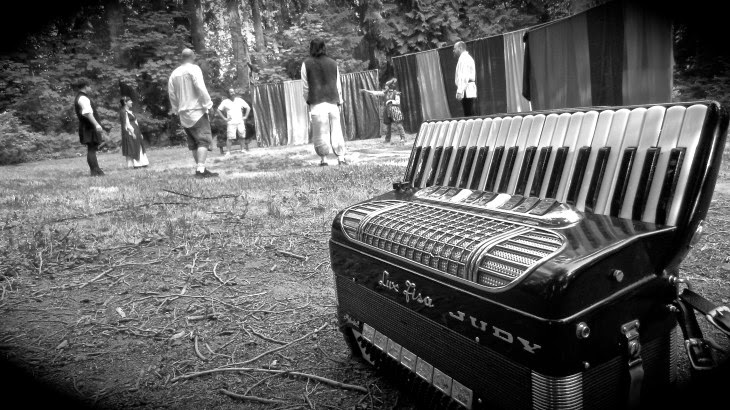 Animal Fire Theatre uses terms like “raw” and “ferocious” to describe their brand of theater. They perform Shakespeare in the park at various outdoor venues with makeshift sets, no microphones and no lights. This is theater on the edge and on the cheap, and it is always highly entertaining. I missed their first outing, which I believe was four summers ago, but over the past two summers I thoroughly enjoyed their productions of Hamlet and Julius Caesar; and this summer they switch gears for the outlandish comedy The Two Gentlemen of Verona.

This early comedy is generally believed to be Shakespeare’s first play; it is also one of his least critically acclaimed plays, criticized for inaccuracies such as ships docking at landlocked cities and for what many critics have considered to be sexist attitudes (although there is disagreement on this). Historically the importance of The Two Gentlemen may be that it is a precursor to many of Shakespeare’s later plays with many of the devices he became famous for such as cross dressing and mistaken identity.

Like many great comedies, this one walks a fine line between sophomoric stupidity and comic greatness. Director Kate Arvin wrote for the program: “Like Master Shakespeare, we too have invented this land and this time period using research and conjecture as opposed to empirical data. . . We have invented costumes out of bedsheets and Grocery Outlet show curtains, a set made of electrical conduit and props from our neighborhood ‘free piles.’” And “We hold these texts so sacred and yet, let’s face it, Shakespeare was wrong! He made mistakes like the rest of us and knowing that the show is full of obvious gaffes made it easier for me as a woman to face the chauvinism in the text; it is as wrong as sailing a ship on dry land.”

There is an amateurish, let’s-put-on-a-show-in-the-back-yard aspect to the production, but don’t let that fool you into thinking they don’t know what they are doing. Arvin is a talented and well-seasoned director, and the cast is made up of some of Olympia’s finest actors. Morgan Picton as Proteus, Korja Giles as Julia, Amy Shepard as Silvia and Maddox Pratt as Valentine are outstanding. And I cannot praise Kate Ayers enough for her over-the-top portrayal of a multitude of characters or for Scott Douglas’s nuanced and underplayed portrayal of Don Antonio, the Duke and others. His interaction with the dog Crab, played by Douglas’s pet dog Tonk is precious. Tonk seems to be an amazingly well trained animal — and patient as can be with the crazy carryings-on of these actors.

There is some inspired dialog (after all, it is Shakespeare) but many of the funniest scenes take place in mime to accordion accompaniment. Other moments of insane hilarity included the bit where Picton runs out on the set wearing a mask. It happens so fast that I can’t explain it and shouldn’t anyway. No spoilers here.

At approximately two hours with no intermission, it does seem a little long. For a little while during what would have been the middle of act 2 if there had been an intermission I found myself wishing they would just get it over with, but then it picked up liveliness heading toward a satisfying conclusion.

There are the expected distractions that come with all outdoor performances: passing traffic, airplanes, kids and animals running around — one small child had to be kept from climbing a tree that was used as part of the set. It is recommended that you come as if to a picnic. Bring folding chairs and quilts, unscented mosquito spray and snacks, and be prepared to put up with some distractions.

One pet peeve I have about all outdoor performances, including this one, is that they seem to feel that since they have the whole of the great outdoors as a stage, they might as well use it all. The stage area is too big and there is too much distance between the actors and the audience — although I have to admit that Silvia climbing a tree was a cool use of the great outdoors.

The show goes on tour during its second weekend, with two 7 p.m. stops on July 31 and August 1 at the Tumwater Farmer's Market, at the southwest corner of Capitol Boulevard and Israel Road, plus a 2 p.m. matinee at the Griswold Building in downtown Olympia, 310 4th Ave E. The troupe returns to Priest Point Park for closing weekend, with 7 p.m. shows August 7 and 8 and 2 p.m. matinees on August 9 and 10.

All shows are free but donations are welcome.

A note on Animal Fire Theatre taken from their press release:

Animal Fire Theatre is the Olympia area's free Shakespearean company. Founded by Austen Anderson, Animal Fire's mission is to bring classical texts to life with energy and ferocity and then deliver them to the community, free of charge. The troupe uses unorthodox rehearsal methods to unlock their instincts, awareness and animal understanding of themselves, their characters and one another. The growling, barking and howling involved with these exercises sometimes attracts curious park goers to rehearsals and only very occasionally the attention of law enforcement.