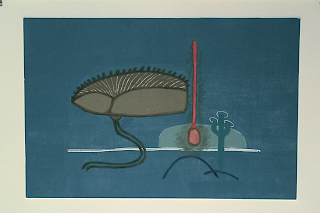 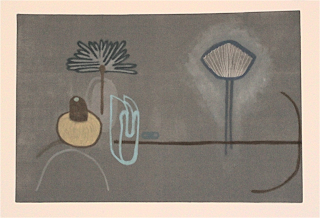 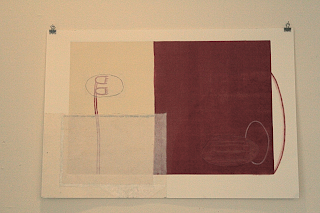 Artist Susan Christian has opened her downtown Olympia studio space for exhibitions and events. She calls the space Salon Refu after the famous Salon de Refusés that made the French Impressionists famous.

The latest show in the space is an exhibition of prints by Haley Bea. I never before heard of her or saw her work, but I was enticed into going by an email from Christian. She wrote, “(Her prints are) not like anything I recognize, but they're charming and a little unnerving.” That was enough to send me down there to see for myself, and I discovered that her monoprints were indeed charming and if not unnerving at least a little prickly and edgy.

I was told she is a young artist, and I assume just starting out. I see that she has a lot of talent and a strong sensitivity to form and surface. I didn’t count the pieces in the show or take notes but I recall that there were around a dozen prints, each approximately 18-by-20 inches with abstract forms delineated by fairly heavy contour lines and a few delicate fine lines, muted colors and rough, velvety surfaces.

The drawing is sparse with minimal shapes floating on almost solid backgrounds. The balance between contrasting and harmonizing forms is impressive.

A few of her pieces appear to be architectural, like blueprints or drawings of unreal structures. One group of prints employs collaged sheets of paper and odd shapes that jut out of the frame in nice ways creating a teetering asymmetrical balance and nuanced changes in surface quality.

All of her works are abstract, although many of them hint at recognizable imagery. I see urchins and anemones, trees and cacti and  — perhaps with a stretch of the imagination — human body parts. There are indefinable aspects to her art that remind me a little of Paul Klee and, a little closer to home, of Chauney Peck, a Seattle artist originally from Olympia whom I have greatly admired for years.

The show runs through July with a closing party July 28 from 7-10 p.m., and will continue by appointment only through August.