Watch ‘Peter Pan,' at Tacoma Musical Playhouse and you will believe 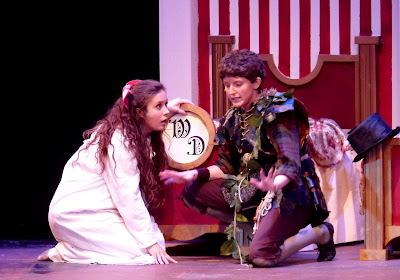 Bailey Boyd is Wendy and Erica Zabelle is Peter in
"Peter Pan" at Tacoma Musical Playhouse. 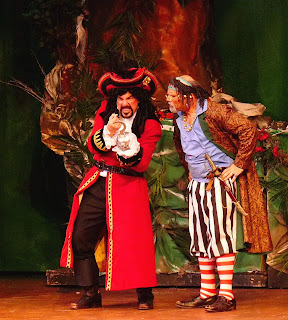 Mark Rake-Marona as Hook and John Miller as Smee.
Photos by Kat Dollarhide.
Published in The News Trivune, Dec. 2, 2011

The musical “Peter Pan” appeals to children of all ages and to adults who want to recapture the wonder of childhood, if only for a couple of hours. Tacoma Musical Playhouse caters to that targeted audience by selling Tinkerbell fairy wings and pirate hats and hooks that light up – and the kids are encouraged to light them up and shout out “I believe in fairies” to restore Tinkerbell to life when her light is dying out in the second act.

Offering “Peter Pan” as a holiday show was a wise choice on the part of TMP because it captures the spirit of the season without referencing Christmas – a nice break from an endless spate of Christmas shows.

Since Mary Martin played Peter Pan on Broadway in 1954, the part has mostly been played by women. TMP’s production is no exception, and Erika Zabelle was a good choice for the role. She has the pixie look generations of audiences have come to expect of the magical boy who never wants to grow up. She also has the grace and rhythm needed to strut and fly and crow with boyish arrogance.

In the other major role, that of Wendy, Bailey Boyd is convincing as a young girl on the cusp of adulthood, and she sings beautifully with a clear voice that is whispery on the low notes and rings out with resonance on the high notes. Boyd may not be familiar to Tacoma audiences, but she is an audience favorite in Olympia, where she has performed in many shows at Capital Playhouse. Her duets with Zabelle on “What Happens (When You’re Grown Up)” and later on “Don’t Say Goodbye,” with backup by Sarah Samuelson as Mrs. Darling, are the most powerful and beautiful songs in the show. Zabelle and Boyd harmonize as a single voice.

Kellen O’Brien as John Darling and Caleb Haalstrup as little brother Michael have the right look for their parts, but could be more exuberant. Mark Rake-Marona, a veteran of countless TMP shows, is inconsistent in the double role of Mr. Darling and Captain Hook. I particularly like the way he captures Mr. Darling’s ambivalence and discomfort in the role of father and titular head of a household that is really run by the mother and the pet dog, Nana (Garrett Young), but his interpretation of Hook is somewhat lifeless until the second act when he sings “Goodbye, Peter Pan.” From that moment on he nails the role and demonstrates his versatility as a singer and actor.

Lexi Scamehorn is majestic as Tiger Lily, and I love her costume (by Janet English). Interestingly, the Indians are costumed not as American Indians but as Aztecs or Mayans. However, their singing and dancing is squarely in the American Indian mold.

I don’t know the ages of the actors playing the Lost Boys, but they look older than they should be, and they’re not all boys. The advantage to choosing older actors to play the Lost Boys is they can handle the dance moves and the complicated blocking better. And a couple of the young women playing boy roles are particularly charming.

With characters flying, Tinkerbell’s moving light and many set changes, “Peter Pan” is a technically challenging show to produce, and the TMP tech crew pulls it off well. John Chenault’s lighting is particularly effective.

The set by Will Abrahamse is not his best work. Some of the set pieces look cheap, and the parts actors have to climb on are slightly wobbly, but the painted backdrops are great. Moving great crowds of pirates and Indians and Lost Boys through these set pieces also proves to be awkward at times – too many people having to exit through too-small spaces, most notably when the pirates capture all the Indians and Lost Boys.

Not credited in the program is the actor in the crocodile suit, but I was told it is stage manager Bethany Bevier. She drew great applause every time she crawled on stage and she got to take off her crocodile head and take a bow at curtain call – a much-deserved bow because stage managers are unseen and unsung heroes of theater, appreciated by cast and crew but seldom properly acknowledged by audiences.