Take that, you (expletive) philatelist! 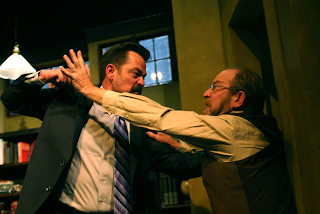 Billed as a comic thriller and “a funny, fascinating and riveting excursion into the dangerous world of stamp collecting,” Theresa Rebeck’s “Mauritius” is a wonderful contemporary drama filled with psychological twists worthy of the best of whodunits. It has elements of a mystery, but it’s not a mystery. It’s an emotional clash of wills between two almost estranged sisters and a trio of philatelists, each one probably out to con the others out of a fortune.

Rebeck, one of America’s up-and-coming playwrights, cut her teeth on crime dramas writing for “NYPD Blue.” That experience shows in her tight plot construction and her ability to create mesmerizing characters.

Writing for The New York Times on the occasion of the Broadway premiere of “Mauritius” in 2007, Robert Simonson said there was at least one betrayal per scene. He quoted the playwright as saying, “I’m actually interested in poor behavior. ... I’m interested in what drives people to poor behavior. I do believe that there are monsters out there, and that they are monsters.”

There’s a lot of bad behavior and a lot of, shall I say, colorful language. Rebeck uses certain words so liberally that Harlequin Productions repeatedly refers in their promotional material to the use of an often-censored word. Artistic Director Scot Whitney refers to it in his curtain speech, and there is even an essay on the meaning and use of the word posted on the wall in the lobby. So if you’re easily offended by gritty language, don’t see “Mauritius,” but if you can take it when it is not just gratuitous, then take a chance because it’s part of what makes these characters real.

Three of the five outstanding cast members are making their Harlequin debut in this play. Duane Deering, who plays Dennis, comes from Dallas, Texas. Kelli Mohrbacher, as Jackie, recently returned to the Seattle area after spending time in Los Angeles. And Alexandra Novotny, as Mary, majored in theater at the University of Wisconsin-Green Bay. Brian Hatcher, who plays the gangster-businessman Sterling, is known locally for his performance in Harlequin’s “A Midsummer Night’s Dream” and Dennis Rolly as the cagey stamp appraiser, Phil, may well be the best known actor in Olympia, having performed in nearly 70 shows up and down the Interstate 5 corridor (including a recent amazing performance in “Jacob Marley’s Christmas Carol” at Olympia Little Theatre).

Jackie, who is nowhere near the nave lamb as she at first seems to Dennis, inherits a stamp collection from her grandfather. She asks Phil to appraise it, but Phil – who does his best to ignore her despite stubborn insistence on her part – refuses to even look at her stamps unless she pays a substantial fee. Then his friend Dennis steps up and says he’ll look at her stamps and not charge her anything. He quickly discovers that she has two rare stamps worth more money than she can ever dream of.

The plot thickens when Jackie’s half-sister, Mary, claims the stamps belong to her and when Sterling enters the picture. He’s the slick and seedy businessman Dennis contracts with to buy the stamps. Dennis warns Jackie not to cross Sterling, who is passionate and dangerous. Everyone throws verbal barbs, and even a couple of fists are thrown as the tension builds to the boiling point. Soon it seems that almost everybody is trying to con everybody else and it’s almost impossible to tell the good guys from the bad guys. Yet, with all these twists, it is easy to follow the plot.

Finally, everything is resolved in a twist ending that is both satisfying and uplifting.

This is a terrific play, well written, well acted and nicely directed by David Nail.