Flesh on display at The Brick House 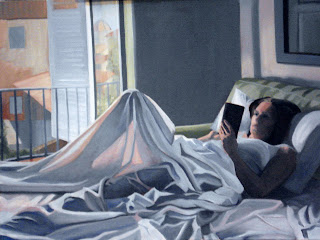 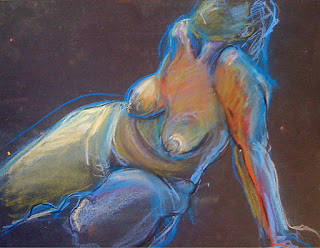 
What does it mean to be naked? The Brick House Gallery encouraged artists to come up with their own definitions of the word with strong hints that they should feel free to interpret nakedness in ways other than the obvious; i.e., figures without clothing. But with very few exceptions the artists in "Naked" went with the more conventional. There are three works in this show that break out of the norm, the most creative being a tapestry by Margo Macdonald of a clear-cut section of forest. Then there is the photo of a red high-heel shoe and a picture of a sock monkey cleverly titled "The Naked Ape." The rest were depictions of naked human bodies, and all but one those are female. Not exactly a revolutionary approach to the word “naked.”

To me, the word means — beyond the obvious —  unadorned, unpretentious, without artifice. This means, if we’re talking bodies, not necessarily prettified and poses that are neither coy nor flirtations.
The great English philosopher and aesthetician John Berger wrote about the differences between nakedness and nudity:

There’s a lot of nudity in this show, but not much nakedness.

The best paintings in the show are "Onalisa in the Studio," collage, pastel, carbon, erasures, by Robert Vogel and "Reading Lolita in Florence," oil on canvas by Margo Macdonald. "Onalisa" is like one of Phillip Pearlstein’s richly patterned studio nudes in which the figure becomes an integral part of a complex, faceted studio scene. The artist even uses a ladder and mirrors, among Pearlstein’s favorite props. Deduct five points for being too derivative, but this is a wonderfully constructed painting nevertheless. "Reading Lolita" is like an interior scene by Edward Hopper, but the figure is more alive than Hopper’s figures. It is a painting of a woman reading in bed, one knee raised and light streaming through the sheet that covers her. The placement of arms and hands and the way the book lines up with a window and little touches like the flat shadow effect of the raised leg all contribute to the solid design of this painting.

There are also a group of energetic pastel drawings by Vogel that are exciting in their vibrant lines and electric color and some nice drawings by Nancy Johnson of swimmers in a pool with rhythmical wave patterns distorting the bodies in delightful ways. The best of these is a little drawing called "Water Shadow Blue."

A few simple plaster casts of bodies by Jada Moon have terrific eye appeal both for the loveliness of the bodies and for the fabric texture of the cast plaster.

Among the most naked figures in the sense of the models being unabashedly oneself are a large painting of an overweight woman in a chair by Peter MacDonald and a nice little nude called "Figure 485," also by MacDonald, with sensitively drawn contours and areas of shadow blocked out in a schematic manner.

I was disappointed that there were not more artists included, but was very impressed with the quality of the work despite it being so conventional.