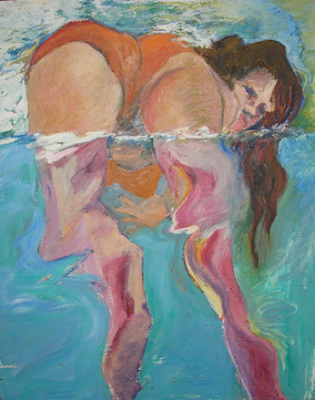 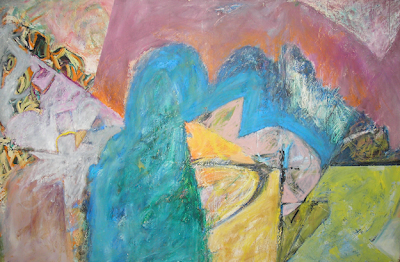 While searching my computer files to update my painting inventory I discovered photos of two old favorite paintings that for reasons I can't remember were never posted on my website. They are "Swimmer No. 38," 41" x 32", acrylic and oilstick on board, and "Window Bill," 39"x60," oil on canvas, 1996.

Back in the '80s I did more than 100 paintings of swimmers. Most of them have been sold, given away, lost or destroyed. This was one of my favorites of the series and one of the few I still have.

"Window Bill" was done nine years later specifically for a show at Childhood's End Gallery in Olympia. The theme of the show as The Golden Mean, and this is the only painting I've ever done by mapping out a grid before I started painting. The grid was based on the traditional proportions of the golden mean. I never understood the mathematics but I know it is roughly a five-to-one ratio, and since my painting methods have always been so intuitive I didn't make any effort to stick to the grid.
Posted by Alec Clayton at 8:51 AM

That swimmer could easily be me! Great painiing.
Mrs. Slug