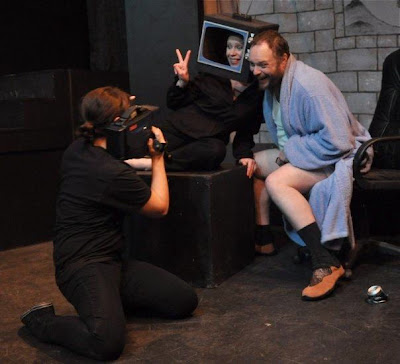 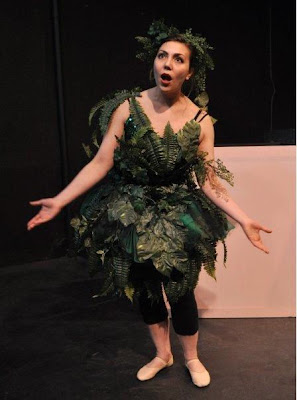 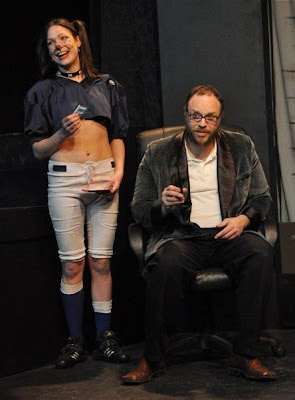 Written by Jeff Goode during the presidency of George Bush, it is a political and social satire that nails Bush to the wall (with some barbs extended to the current White House), that skewers hypocrisy and consumerism in its many forms, that mocks society’s fear of dirty words in a manner Lenny Bruce and George Carlin would be proud of, and that celebrates hedonistic sex. It is presented in the form of a fairy tale for adults.

Performed by Theater Artists Olympia in the little Midnight Sun performance space in downtown Olympia under the direction of Robert McConkey, “Poona” is a rip-roaring comedy with an ensemble cast made up of many of the best actors in the South Puget Sound.

As in all good fairy tales, there is a wise and kindly storyteller (Scott C. Brown) to move the story along. But before the storyteller can begin his tale he is usurped by a false story teller (Lauren O’Neill) who turns out to be a psychotic killer and is hauled off to the loony bin or jail or somewhere. Then Brown, the true storyteller, comes out wearing a smoking jacket and puffing on a long-stemmed pipe and begins to read, “Once upon a time … there was a fuck dog named Poona,” and Poona (Alison Monda) makes her appearance as the lonely and unloved Poona nobody will play with. Her Fairy God Phallus (Christian J. Doyle) gives her a big pink box to play in, and suddenly everyone loves Poona (literally, has sex with) and can’t wait to play in her big pink box (have sex with).

Into this fairytale world comes a strange and wondrous collection of characters including a television who rules the world (O’Neill again), a couple of lost space aliens (Christopher S. Cantrell and Paul Purvine) a talking shrub (Erica Penn), a reporter (Tim Goebel) who is accidentally taken to heaven where he wins $500 in a bet with God, a sweet little girl named Suzy Suzy (Amy Shepard) who turns into a mass murderer and executes her victims with her computer (Heide Wisner) after being numbed by playing computer games, a fairytale Handsome Prince (Rob Taylor), a pair of angels (Pug Bujeaud and Heather Christopher), and other assorted characters. Even the stage hands get into the act (Wisner and Josh Palmer).

Monda turns in the most accomplished job of acting I have yet to see from her. She is sexy, innocent, sad, ecstatic, confused; constantly and quickly going through a huge range of emotional expressions while cavorting about stage and in her box with dance-like physicality and athletic skill. Her costumes are noteworthy as well, a dog suit and underwear throughout the first act, then a football uniform and finally an old lady house dress. Credit costume designer Sunny Jim Morgan for fabulous costumes made on a limited budget.

Brown, who has often proven his skill as a dramatic actor (I have twice named him best actor in my annual “Critic’s Choice”) shows in this play that he is also skilled as a comic actor who is quick on the uptake when responding to improvised remarks from other actors and audience members.

Penn is outstanding as the talking Shrub (a nod to Molly Ivins). Being the first of many actors to break the fourth wall in this play, she complains to the audience during a scene change that she’s too accomplished as an actor to be relegated to playing a shrub. And she proves it by doing Hamlet’s “to be or not to be” monologue. This Shrub is a philosopher and a poet, and a power to be reckoned with.

Purvine and Cantrell are outstanding as, respectively, The Man Who Could Sell Anything and God — and as the space aliens. One of the funniest and most inspired bits in the play is when the two of them toss back and forth two of the most offensive words in the English language in a rapid-fire kind of who’s-on-first routine.

Bujeaud and Christopher are funny angels and both double up in various other roles including a silly rabbit (Bujeaud) and a sadistic palace guard (Christopher). O’Neill is hilarious, and Doyle the troubadour penis sings in an infectious folksy style.

When: 8 p.m., Thursday-Saturday
Where: The Midnight Sun, 113 Columbia St. N.W., Olympia
Tickets: $12 available at www.buyolympia.com and at the door. Seating is limited. Buy online to assure a seat.
Posted by Alec Clayton at 7:37 PM