Talented cast drives hilarious ‘Other Half’ 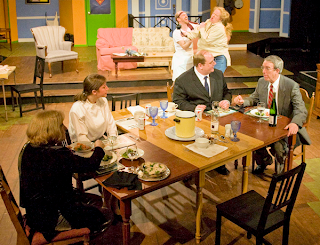 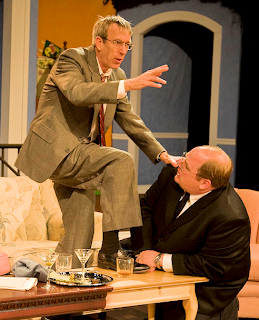 
On the night I saw Alan Ayckbourn’s “How the Other Half Loves” at Lakewood Playhouse there were more empty seats than full. That’s a shame, because this play is laugh-out-loud funny.

Director Doug Kerr said of the playwright, one of Britain’s most popular and most prolific: “He never shies away from the dark side of life in his comedies. … But his deft pen manages to make us laugh at these dark issues.”

The writing is complex and inventive and so is Kerr’s staging and direction, which involve three married couples in two different apartments at different times, with multiple scenes happening simultaneously on stage.

Frank Foster (Scott Peterson) is a boss of the company where the other two men work. He’s a well-meaning busybody who tries to run everyone’s life. He epitomizes the Peter Principle, which says that in a hierarchy (in this case a company and the employees’ private lives) every employee tends to rise to his or her level of incompetence.

Frank’s wife, Fiona (Laurie Sifford), is having an affair with one of Frank’s employees, Bob Phillips (Nathan Rice). When Fiona comes home at 2 a.m. on their anniversary night and Frank questions her about it, she makes up a story about running into Mary Detweiler (Adrienne Grieco), who cried on her shoulder all night about problems with her husband, William (Justin Carleton). A few misunderstandings later, Frank is convinced that Mary is having an affair with Bob and, in his bumbling way, he thinks he can fix everything.

The Fosters invite the Detweilers to dinner Thursday night, and the Phillips invite them to dinner Friday night. The two dinners in separate apartments on consecutive nights are played out simultaneously with Mary and William quickly turning in their seats to switch scenes while the four other characters pop in and out in typical farce fashion.

The affairs, incriminations and misunderstandings all play out in thoroughly modern ways, none of which should be divulged in this column.

Kerr’s direction is excellent, and the talented cast carries out the complicated timing and blocking without a hitch.

Peterson is the comic glue that holds this farce together. With his long-limbed gait and goofy grin, he reminds me of a young Dick Van Dyke from his Rob Petrie days.

Sifford, last seen at Lakewood Playhouse in “Our Town,” is an experienced actor who slips into her character so effortlessly that it is easy to forget she’s acting. She almost gets lost in her role because Fiona is the only character in this play with no memorable quirks or absurd comic bits. She comes across as an island of sanity in a madcap world, but underneath this apparent rock of stability is a conniving woman who is carrying on a clandestine affair with her husband’s junior employee.

Cara Roper plays Bob’s long-suffering wife as a lovable and good-natured slob. She can’t cook or take care of their baby or clean house, but when push comes to shove – and it does – she knows how to handle her two-timing husband.

Rice has the most difficult role to fill as Bob, the philandering husband who stopped growing emotionally at about 15 years of age. Rice’s acting is great, but his character goes too far toward the dark side in a couple of scenes where his nastiness overpowers the humor. Drunks might be funny to teenagers and people stuck in the Rat Pack era, but when Bob’s drunkenness and meanness cross the line he ceases to be funny. Fortunately those moments quickly pass, and bad Bob gets his comeuppance – repeatedly.

If the other four actors shine, Grieco and Carleton absolutely blaze as the Detweilers. The whole play is energized whenever either of them are on stage. Grieco, who was a marvelous Maria in “The Sound of Music” at Lakewood Playhouse last month, transforms herself into a mousey little woman with marvelous tics who is both lovable and pitiable. She squeaks and twitters in a most delightful way. And Carleton brings the house down with his broad comic strokes, especially when he squirms on the couch in desperate need of a bathroom.

This play should fill the house at every performance.